"New picaresque tale Louisiana Rogue falls in the tradition of rogue literature established by Tom Jones and other early novels."

TotalRecall Publications, Inc., announced today the publication of ‘Louisiana Rogue,’ a peripatetic or picaresque story in the tradition of rogue literature established by Henry Fielding’s ‘Tom Jones’ and other early English novels in the 1700s.
A tale told in the first person, Louisiana Rogue recounts “The Life and Times of Pierre Prospère-Tourmoulin, Picketpocket, Thief, Gambler, Fugitive, Undertaker, Barber, Doctor, Priest, Prisoner, Bandit, and Count.” The book gives readers an understanding of the cultural history of New Orleans and Cajun society during the years 1831 – 1839. It also provides perspectives on early American society from the point of view and experience of the ultimate outsider.

Louisiana Rogue is published by Lamar University Press and available through TotalRecall Publications Inc. TotalRecall was founded in 1998 by Bruce Moran, a former NASA IT professional who transitioned into computer instruction and educational materials. The company began with the introduction of study guides and Q&A testing software for various computer and financial certification exams and expanded into library and information science textbooks in 2007. Since 2008, the publisher has been developing a fiction product line by debut authors that focuses on mysteries, thrillers, and military action. The first thriller published, Child Finder by Mike Angley, won the prestigious Silver Medal Award in the Fiction category of the Military Writers Society of America in 2009. TotalRecall publishes more than 200 fiction and non-fiction titles, all distributed worldwide through book retailers and wholesalers and via eBook databases such as ebrary, EBSCO, and Books24x7.com. http://www.totalrecallpress.com

Depicts all levels of 1830s Cajun society via the life and times of a colorful, multitalented rogue.

Set in the 19th century, new historical novel 'Louisiana Rogue' is a fast-paced romp through all levels of Cajun society via "The Life and Times of Pierre Prospère-Tourmoulin, Pickpocket, Gambler, Fugitive, Undertaker, Barber, Doctor, Prisoner…" Researched and written by Dr. Harold Raley, the book gives readers an understanding of the cultural history of New Orleans and Cajun society during the years 1831 – 1839.

Author Bio : Harold Raley is a retired college professor who lives in Friendswood, TX. A native of the Deep South, Dr. Raley spends much time observing people in all levels of society. His thorough command of English, French, and Spanish greatly helps him understand and write about the people and cultures he visits. He has traveled widely in the Americas and Europe and studied the literature, history, and philosophy of France, Spain, the United States, and England. A published author of a dozen books, Dr. Raley also has academic credentials and has taught for universities in Texas, Alabama, and Oklahoma. He and his wife Vicky live in Friendswood, Texas, near Houston. 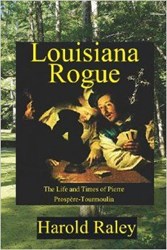