Please submit a synopsis to richardtbaran@gmail.com

Literary Agent and Author Richard Dick Baran holds a doctorate and two masters’ degrees besides his bachelor’s in business. A Navy veteran, he taught and coached for forty years at the secondary school and collegiate levels. Besides publishing a book about coaching football, he’s published a short story and several dozen articles in professional journals. Dick and his eighth grade sweetheart, Carol have twenty grandchildren and they divide their year between Franklin Park, Illinois, Phoenix, Arizona and Minocqua, Wisconsin.
Dick was both a teacher and a football coach for forty years at the secondary and collegiate levels. He has nine completed novels to his credit and has taught adult continuing education classes in Creative Writing and How to Market Your Writing. His varied “likes” include two of the three R’s—and ‘Rithmetic ain’t one of ‘em. Fishing, hiking and golf, all accompanied by his ubiquitous camera, expand his eclectic list of likes.
Dick further likes Mel Brooks, Woody Allen, Bob Newhart and any comic whose humor does not live or die on the misuse of the profane. Also Jazz, Swing, Blues, pre-New York money influenced Country, Bluegrass and 50s and 60s Rock–devoid of pyrotechnics, all tempt his musical taste buds.
A Chorus Line is his favorite play, followed closely by Jersey Boys and most Neil Simon works. Favorite books and authors could well be his next writing project. Recent likes are “Water for Elephants,” “The Help” and “Devil in the White City.” Any novels written by Clive Cussler, as a solo, and Vince Flynn entertain him along with historical novels.
This cicerone will work his tail feathers off for any storyteller who knows how to structure an English sentence and has a thick hide. His nose does not take kindly to Sci-Fi, wordsmiths beating a drum for a cause or those who attempt to remodel best sellers in their own image and likeness. 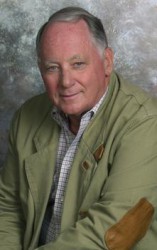