A Fresh Look at the Underground Railroad

Secret Lives of the Underground Railroad in New York City

"This is a fascinating story with a cast of remarkable characters. The most amazing part is that it’s true." Bruce Reeves, author of Delphine."

A newly-released book, Secret Lives of the Underground Railroad in New York City, reveals secrets about the legendary network that have been virtually unknown for almost 160 years.

It centers around the little-known Record of Fugitives kept by abolitionist editor, Sydney Howard Gay from 1855-to-1856. Authored by Don Papson and Tom Calarco, and published by McFarland & Company, it tells the story of two men, Gay and Louis Napoleon, an obscure free black man, who devoted their lives to assist fugitives from slavery.

At a time when racial unrest seems to have gripped our nation again, books about whites and blacks working together is a healing message.

Among the notables who share the pages of the book are Frederick Douglass and Harriet Tubman. One account never published before about Tubman is included in the book.

“This is a fascinating story with a cast of remarkable characters. The most amazing part is that it’s true,” wrote novelist Bruce Reeves. “There’s material here for an epic historical novel, but it is gripping as a straight historical narrative.”

If you would like to contact the authors for an interview, go to the website http://www.secretlivesoftheundergroundrailroadinnyc.com where information about the authors and the book is available. You can also reach them at tomcalwriter@gmail.com or 518-573-7163.

A leading independent publisher of academic and nonfiction books, meeting high library standards has always been a major focus, and many McFarland books have received awards. We’re located in Jefferson, North Carolina, where we offer 5100 books in print, offer nearly 3000 ebooks through online booksellers, operate our own printing facility, and employ 55 people.

The tale they tell of New York City’s role in the Underground Railroad 'is that it was a moral challenge posed to a nation that had lost its moral compass; and around which rallied morally committed individuals whose freedom was not worth much so long as others were enslaved'… And what a tale have they told ... A.J. Williams-Meyers, professor of Black Studies, SUNY New Paltz. Secret Lives is a great example of independent scholars uncovering important information, who are also able to place the local narrative in broader context. Though Secret Lives is primarily about Underground networks in New York City, that network connected to other networks in the South, in Pennsylvania (particularly William Still's network in Philadelphia), and connected to the north to havens in Canada and New England. Anyone working on the Underground Railroad in the Mid-Atlantic, in New England, in New York and into Canada needs this book. Tom Calarco and Don Papson are to be commended not only for this book, but for years serious investigation into the history of the Underground Railroad ... Christopher Densmore, Archivist, Swarthmore College Papson and Calarco have given us fascinating biographical details about Napoleon and Gay, placing them within the regional and national antislavery and Underground Railroad networks to freedom. The authors reprint the entire journal, adding additional material further illuminating the many names and events mentioned by Gay, revealing powerful stories of narrow escapes by brave and desperate people fleeing enslavement through a diverse network of Underground Railroad agents from Virginia to Canada. This book is a must-have for researchers, genealogists, students, teachers, and general readers interested in this dramatic period in our nation’s history! ... Kate Clifford Larsen, author of Bound for the Promised Land: Harriet Tubman, Portrait of an American Hero

New revelations about the Underground Railroad are published for the first time. 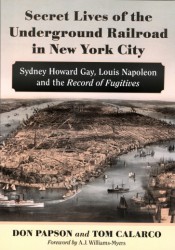