A veteran of Iwo Jima ponders if the fight was worth it. Jerry Yellin, 91, speaking on Iwo Jima, 70 years after the battle.

News Hook: Perhaps one of the most iconic images of any war is the photo of the raising of the US flag on the Japanese island of Iwo Jima. Seventy years have passed since that brutal battle of World War II. On March 21, dozens of elderly US veterans traveled back to the island. Men like former US Army Air Corps Capt. Jerry Yellin. “I flew P-51s off of Iwo Jima, starting on March 7, 1945, when the Marines took enough land round the first dirt airstrip." Select the link to read more. Jerry Yellin is a world renound author or three WW II titles. Of War and Weddings, The Blackened Canteen, and The Letter. Jerry authored The Resilient Warrior, Healing the Hidden Wounds of War to help our Heroes coming back from all wars.

When you receive 1.3 million hits in less than two days. Some one is interested in what you have to say. 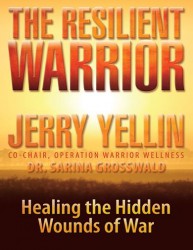