News Hook: Never before has a book taken readers inside the FBI Academy. "FBI Animal House" does, and exposes training which was more suited for the 1930’s than the 1980’s and 90’s. Readers will follow a class through the entire academy and be astounded at what they did to cope, and what they failed to learn. Could the tragedies at Waco and Ruby Ridge, the attacks on 9-11 and the Boston Marathon have been prevented? The award-winning author of this revealing and controversial book, a retired FBI Special Agent, believes they could have if only New Agents were properly trained. But they weren’t. Weeks of their initial training at the vaunted FBI Academy were a complete waste of time. Several years ago, a D.C. pundit wrote “The FBI is training their agents to arrest Bonnie and Clyde, but trying to find Osama Bin Lauden.” Laugh if you choose, but “FBI Animal House” will unravel the myths and mystique which began with J.Edgar Hoover's propaganda machine in the 1930's and continue today.

The author, a Retired FBI Special Agent, shows that the New Agent’s training at the FBI Academy changed very little in the 60 years between 1935 and 1995. Perhaps even beyond that.

"FBI Animal House is available through Amazon, or the publisher.... www.houdinipublishing.com." 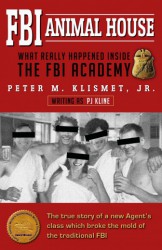