Author Terry Moran addresses racial issues in the 1960’s in a unique way in his book “My Enemy’s Face.”

Terry Moran opens up about his book “My Enemy’s Face.” His unique style helps the reader immerse themselves in the story and relate to the challenges of each of the characters.

Author Bio:Terry Moran made a career in law enforcement for 28 years before retiring from Federal service with the FBI and DOE in 2008. He lived in Alabama from 1961 to 1967 where his father was a Special Agent with the FBI. Terry remembers his father working multiple civil rights cases involving members of the Ku Klux Klan. Knoxville native Margaret Moran graduated from the University of Tennessee with a degree in Graphic Design. She taught Art and Photography to both elementary and high school students for 18 years. Asked why she and Terry kept working on “My Enemy’s Face” for 15 years, Maragert says, “We just believed so much in the book. I imagined it as writing a movie and I fell in love with the characters. So much of the spiritual part felt like it was coming straight from God, not my words. I really think He inspired so much of the writing… so how can you give up on God?”

Question: Where did the idea for My Enemy’s Face come from?

Answer: Terry had the idea almost fifteen years ago, the novel was accepted by a small publishing company. Margaret helped edit the book, but began to have the idea to add the element of faith to the book. The publishing company went out of business before the book was released. Terry liked the idea of adding the Christian element, and, without the promise of publication, the husband and wife team continued working on it. For several years, both kept the idea alive, adding chapters and rewriting it almost completely.

Question: Why did you want to write about racism in the early sixties?

Answer: We were both very young then, but it was such a pivotal time. We remembered so many instances of inequality during that time period. Terry’s father actually worked for the FBI in Alabama, sent to help keep the peace. He had informants that infiltrated the Ku Klux Klan. Margaret remembers her second grade teacher bringing up the terrible unfairness of segregation. It was the first time she heard a white woman concerned with what was going on.

Question: Who is on the cover of the book?

Answer: Our son, Taylor, and a good friend Justin Emerson. They ran track together in high school.

Question: Was it difficult to write a book together?

Answer: No, not at all. I don’t think there ever was a time that we didn't love what the other wrote. We were definitely on the same page during the whole process.

Question: It took a long time to finally get published. Why didn't you give up?

Answer: We just believed so much in the book. I imagined it as I was writing as a movie, and I fell in love with the characters. So much of the spiritual part felt like it was coming straight from God, not my words. I really think He inspired so much of the writing, So how can you give up on God?

Question: Who do you imagine in the lead roles if it were a movie?

Answer: When we were first writing it, we imagined Brad Pitt as Billy Ray. Obviously, as time went on, that couldn't work! Then we thought maybe one of our sons could be in it, as they are aspiring actors. But they are now almost too old, too! I would like to cast new unknown actors in the roles of Noah and Billy Ray.

Question: Terry has written another book, The Miami Files. Is it anything like My Enemy’s Face?

Answer: No, not at all. It is modern day and a mystery. It is full of action, the FBI, the Mob, and narrow escapes. The only thing in common is the character development. You really feel like you know these people.

Question: What’s your next project?

Answer: Our son Mitchell came up with a really intriguing idea. Terry is going to work on that, with maybe a little help idea-wise from Margaret.

Question: If you could do anything, what would you do?

Answer: Easy, write full time. Margaret has a series of children’s books she is working on, both writing them and illustrations.

Question: What is the most important thing in your lives? 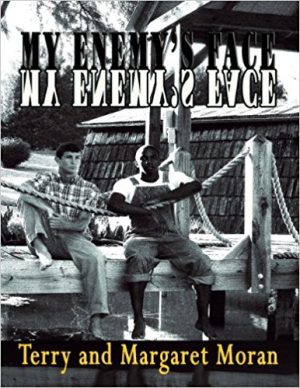