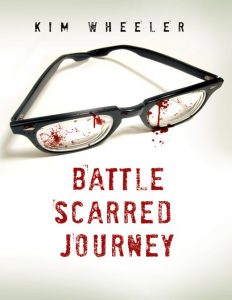 The book covers several abuses metered out mainly due to skin colour, unknown parentage and humble beginnings and then swiftly moves on to a litany of injuries, surviving meningitis, drug and alcohol abuse and then disabled with an incurable spine injury.
The Battle Scarred Journey then describes with painful honesty about my complete breakdown and how bit by bit and day by day I climbed from the bottom of my darkened pit towards the light of freedom and salvation. A journey that in itself took over ten years to where I am now, a free and content man who enjoys nothing more than my learnt freedom.

In The Battle-Scarred Journey Kim Wheeler recounts his journey from the deep emotional pain of an abandoned and abused childhood, through challenges from severe physical injuries, drug and alcohol abuse, and ultimately to wholeness and healing with the help of a caring psychiatrist.

A Battle Scarred Journey is a gritty, brutal, honest and painful story of one man’s trials in life.

I was born in University College Hospital, London, back in July 1954 and within a few days, my Mother deserted me. Now the reasons behind my separation from my birth mother are pretty vague, but I can share what I think or imagine what it must have been like for her, and the pressure she had to endure at the hands of the cold hearted uncaring bastards who saw my mother as nothing more than a poverty stricken slut. If you were single and pregnant in 1953 you were looked down upon, if you were single, pregnant and the colour of the child’s father wasn’t a perfect white British, you were looked down upon, if you were single, pregnant, had a coloured man’s baby inside your womb and the child was brown skinned, you were not only looked down upon from the rest of the country you were also scum and if you would like to add that she was also unwell whilst carrying a half caste child, was also homeless, a long, long way from home, loved ones, your family and were offered absolutely no help with no benefits whatsoever whilst being treated like scum, the chances of keeping that child were two fold, slim and none. My guess is that she was, like a lot of other women in those days told, ‘You give that bastard brown child up right now or we will send you to Hoxton Hall Mental Home’.

Even the strongest will in the world could not cope with the unthinkable amount of peer pressure from her supposed betters and was forced to have her child forcefully removed. I was also removed from the only mother I had, and all because society deemed it wrong to have a bastard half caste child, well that’s the truth of the matter, and I at the tender age of just fifteen days was torn away forever from my poor sick mother’s broken heart. I often wondered what the kind of cruel separation would do to a child and a man, well I know exactly how that feels, rejection is a cruel bastard of an emotion made even worse when it was forced by some repugnant, odious and prejudiced suit working in the odious, repugnant, prejudiced system. How do I feel about this? Well one word sort of sums it up, heartbroken, but I can assure you, I have a dictionary of a lot more.
I was then moved to a children’s home in Lewisham, where I have very few memories, but the five years incarcerated would have an enormous effect on the rest of my life and probably caused more mental angst than all of the following years put together.

Children don’t do alone very well and although we survive physically, mentally we hurt and this hurt never seems to go away. As much as I hoped that one day my past emotions would dissipate, it seems the complete opposite occurred. So I and others who were brought up this way are indeed, scarred for life. Not being loved is the obvious emotion but there are a lot more, such as not being granted attention except for the basic needs, which then shatters self-confidence and plants the seeds of distrust in others, and when continually provoked that leads to strong feelings of violence, a longing for freedom and running away from a dull vegetated state while suffering from aloneness and loneliness, to happily jump through fire to find a friend, and sadly, be condemned to carry the odious suitcase of my past with me forever.