Bob Doerr releases “The Rescue of Vincent,” his second MouseGate book in the Enchanted Coin series.

The Rescue of Vincent:Book 2 of Enchanted Coin Series

""Imagine being a fourteen year old again and finding a coin that seems to give off a light of its own.""

Fourteen year old Ricky Street discovers a magical coin in a small creek near his parent’s Florida home. To his surprise the coin has his name inscribed on it along with directions that he toss it into the fountain by the Tree of Life at Walt Disney World. When he does he suddenly finds himself transported to a strange world where he encounters two other teens from two separate worlds who had also been transported there by magical coins they found. The three soon meet Vincent Wollitzer, whom they save from drowning in quicksand, and learn that if Vincent doesn’t reach civilization soon his world will be thrust into a terrible war. Together the four have exciting adventures in their efforts to get Vincent back to civilization including attacks by dragons, sea monsters, and other strange creatures.

The Rescue of Vincent: Book 2 in The Enchanted Coin Series is a 31,000 word fantasy adventure targeted at Middle Grade readers.

Bob Doerr is a full time author publishing five mystery/thrillers, the Jim West series, and was selected by the Military Writers Society of America as its Author of the Year for 2013. The Eric Hoffer Awards awarded “No One Else to Kill” its first runner up to the grand prize in the category of commercial fiction for 2013. Two of his other books were selected as finalists for the Eric Hoffer Award in earlier contests. “Loose Ends Kill” was awarded the 2011 Silver medal for Fiction/mystery by the Military Writers Society of America. “Another Colorado Kill” received the same Silver medal in 2012 and the silver medal for general fiction at the Branson Stars and Flags national book contest in 2012. A novella titled “The Enchanted Coin,” which he wrote with his granddaughter for middle grade readers, was released in September 2013. In January 2014, “Paragraphs: Mysteries of the Golden Booby,”, a book Bob co-authored with three other authors, was released. Bob lives in Garden Ridge, Texas, with Leigh, his wife of 40 years, and Cinco, their ornery cat.

All of Bob Doerr’s books are available through Amazon.com, Barnes and Noble.com, Nook, Books-A-Million and TotalRecallPress.com.

TotalRecall Publications Inc. was founded in 1998 by Bruce Moran, a former NASA IT professional who transitioned into computer instruction and educational materials. The company began with the introduction of study guides and Q&A testing software for various computer and financial certification exams and expanded into library and information science textbooks in 2007. Since 2008, the publisher has expanded into general nonfiction and now publishes more than 200 non-fiction and fiction titles, all distributed worldwide through book retailers and wholesalers and via eBook databases such as ebrary, EBSCO, and Books24x7.com. http://www.totalrecallpress.com
"The Rescue of Vincent," Bob Doerr's second MouseGate book and the next in the Enchanted Coin series, follows the story of fourteen year old Ricky Street and his discovery of magical coin.

Author Bio : Before becoming a full time author, multi-award winning author Bob Doerr specialized in military counterintelligence and criminal investigations for 28 years. His published works include five mystery/thrillers that have garnered a variety of awards and a novella for middle grade readers. He also won Eric Hoffer Awards in 2013. 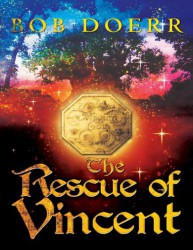