1003 Sea Palms West Drive
Saint Simons Island Georgia 31522
United States
Genre : Mystery - Historical fiction based on U.S. Secret Service counterfeiting currency and coin investigations.
Awards:
The Author's First Book, Worthy Of Trust And Confidence, Was The Winner Of The Westerns Division, Ultimate Hero Writing Contest And A Top Finalist In The Young Adult Book Of The Year By The Colorado Authors' League
Associations:
Don Brewer Is A Member Of The Association Of Former Agents Of The United States Secret Service, The National Association Of Eagle Scouts, The National Association Of Peruvian Horses Of America, And The Western Writers Of America, As Well As The Colorado Authors League, The Saint Simons Literary Guild And The Booth Western Museum Writers Guild.

Author Donald Brewer spent 26 years with the United States Secret Service, retiring as the Special Agent-In-Charge of the Counterfeit Division in Washington, D.C. Don spent his early years as an undercover and case agent in the Atlanta Field Office before moving to Miami, where he spent 11 years in the 1980’s when Miami was the counterfeit capital of the world. In one 24-month period, he and his squad suppressed 26 counterfeit manufacturing operations. He has appeared on the Discovery Channel and the Learning Channel in episodes detailing the manufacturing of counterfeit U.S. currency. In addition, he has given speeches and made presentations regarding counterfeit U.S. currency at various conferences and seminars sponsored by Interpol and other foreign police agencies.
Don has a B.A. from Furman University and an M.S. in Criminal Justice from Georgia State University. He is a member of the Association of Former Agents of the United States Secret Service, the National Association of Eagle Scouts, the National Association of Peruvian Horses of America, the Western Writers of America, and the Colorado Authors League.
Don and his wife, Linda, are the proud owners of two Peruvian horses (SRR Animoso and LEA Torreon), and have ridden in a number of shows and parades.
Don is a throat cancer survivor, and after 12 years, has been declared cured. Such victories do not come without a price; Don now speaks with an electronic artificial larynx. The couple split their time between St. Simons Island, GA, and Cotopaxi, Colorado. 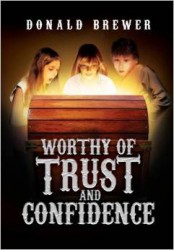