By by Bob Doerr

This Jim West mystery/thriller, the sixth in the series, finds Jim traveling to the Texas Hill Country to attend the grand opening of a friend’s winery and vineyard. Upon arriving in Fredericksburg, Jim witnesses a brutal kidnapping at a local coffee shop. The next morning while driving down an unpaved country road to the grand opening, he comes across an active crime scene barely a quarter mile from his friend’s winery. A Fredericksburg policeman who talked to Jim the day before at the kidnapping scene recognizes Jim and asks him to identify the body of a dead young woman as the woman who was kidnapped. Jim does, and as a result of this unwelcome relationship with the police is asked the next morning to identify the body of another murdered person as the man who had kidnapped the young woman. A third murder throws Jim’s vacation into complete disarray and draws Jim and a female friend into the sights of one of the killers.

This Jim West mystery, the sixth in the series, is set along the Texas Wine Trail in the scenic Texas Hill Country, and finds Jim in Fredericksburg to attend the grand opening of a friend’s winery and

A fast-paced read for the whole family. Caffeine Can Kill touches on all the vices: murder, theft, prostitution, and jealousy. Bob Doerr weaves the tale in such a way that other than some blood and a rattlesnake bite, the reader can enjoy the ride without the swearing and violence some novels use in place of great writing. — Bill Wetterman, author of The Peacock Trilogy. 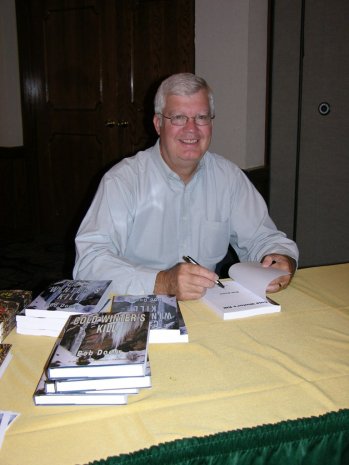