Conversational Spanish for Adults: Seeing What You're Hearing

"The book teaches you to converse in social situations with friends and family as well as while dining, shopping and traveling."

Spanish has become the second language in the United States. More children take it as their second language in high school and more adults are looking for new and effective ways to learn Spanish. Susan Ann Roemer has developed a method called “mapping of sounds” which allows the student to learn Spanish more efficiently. People learn their languages by hearing words and then understanding what they mean. A child learns words, strings them together in phrases, and is later corrected by his or her parents. Imagine if a 4-year-old in saying a sentence were forced to say the complete conjugation of the verb before going on to the next phrase! Yet many people think that to learn a new language they need to learn all the conjugations before they continue.

This method is in essence a “mapping of sounds”. The students are taught a phrase, what it means in English, and what the sounds look like through a phonetic transcription that is unique to this method. Spanish language learners may practice the sounds without the need of an instructor being present. The advantage is clear: it is one thing to hear the sounds and repeat the words; it is quite another thing to have a visual image of what the sounds look like. Recent research confirms what many have long suspected — most people are a combination of visual and auditory learners. It only makes sense that a teaching approach should be directed at both modalities in addition to some kinesthetic activities to reinforce the learning. The students will be able to take what was spoken in the classroom and easily reinforce it at home through additional practice.

In music some people can produce music “by ear” while others need to read the music. The printed page also describes the cadence and scales, whole or half notes, etc. In some ways this approach can be compared to sheet music rather than to music produced by ear. It is helpful to have written instructions to complement the initial practice regardless of whether one is trying to communicate the same sound in music or in language learning. This gives more detail and allows the producer to repeat the message more accurately.

The four modalities of learning any language are reading, writing, speaking, and listening. Research has shown that a person can master any concept in any language after being exposed to it a total of ten times. It can be a language concept, a scientific theory, or a mathematical theorem, but the important point is the need for repetition. The goal of this approach is to make learning the Spanish language repetitive without being boring! Simple phrases are repeated in multiple contexts. Students are able to reproduce the phrases outside the classroom setting in situations where they feel comfortable. Since it is usually impossible to transport students to a Spanish-speaking environment, the method by definition needs to be vicarious. Of course the more they use the phrases taught in class and reproduced outside the classroom, the faster they learn the language. With repetition in and out of class their speed and pronunciation will improve; their words and sounds will all flow together.

In this method the three steps of each concept are (1) the structure; (2) an example; and (3) a given practice task for the student with a partner. In the military the same steps are implemented to teach a task — structure, example, and practice. It only stands to reason that the more opportunities the student has to practice a given task, the more efficient the learning will be in the student’s memory bank. As the old adage goes, “Practice makes perfect.”

Conversational Spanish for Adults uses “sound mapping” to teach students what the word sounds like.

Author Bio : Susan Roemer is currently teaching conversational Spanish to adult students. In her experiences of teaching English, Spanish, and ESOL (English for Speakers of Other Languages) in elementary school, high school, and college, she has developed a unique and profound approach to language learning. Over the years she has worked in California, Mexico, and the DODDS (Department of Defense Dependents' Schools) in Germany. She has taught Spanish to native English Speakers; English to native Spanish speakers; proper Spanish to struggling native Spanish speakers; and written Spanish to illiterate native Spanish speakers as a precursor to teaching them English. She has taught students from preschool to senior citizens. While working for the Mexican federal government in Mexico City, "Licenciada Roemer", as she was known at the office, taught auditors how to write correct reports in Spanish. Very few individuals have taught a language in so many different contexts. This gives her an unusual perspective, combining the knowledge of how people learn generally with how to learn a language specifically. Susan came to understand the importance of providing the students with a way to see the language when they were not in a language laboratory or being instructed by a teacher. Susan Roemer received her B.S. in Elementary Education from the University of Minnesota and her M.A. in Intercultural Education from the University of the Americas (Universidad de las Americas) in Mexico City. She lived in Mexico City and Cuernavaca, Morelos, Mexico for 16 years, where she raised her family, and currently resides in Peoria, Arizona. 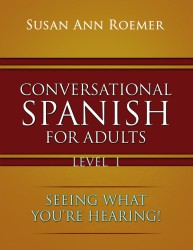