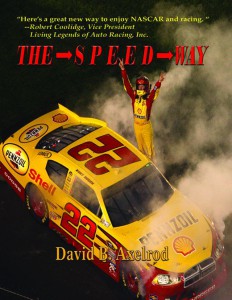 Let’s get the leering out of the way
right away, but it doesn’t hurt that
she’s really good looking. Still,
if a woman is going to race in what
is still a man’s world, she’d better
be plenty tough about the comments.
We aren’t that far from sexy pin-ups
on every mechanic’s garage walls.

In Serbian, it’s DAN-ee-tsa.
Americans could probably learn
that, although she, herself, says,
“Dan-i-ka.” Maybe because
in Serbia, they also still say,
“Jena i jena” — a woman is
a woman — as the caption for
a scantily-clad centerfold in
the daily news. That’s a good
reason for a name to get
Americanized.

3. Winning Some Points at Least

Break a few rules, break a few
expectations. GoDaddy! Even her
sponsor is techy and new. Her first
year in NASCAR she racked up
enough points to beat 100 men.
Now she’s signed on as a star.

(For more poetry by David Axelrod’s “The Speedway” go to www.totalrecallpress.com or www.amazon.com.)