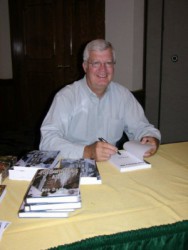 Award winning author Bob Doerr grew up in a military family, graduated from the Air Force Academy, and had a career of his own in the Air Force. Bob specialized in criminal investigations and counterintelligence gaining significant insight to the worlds of crime, espionage and terrorism. His work brought him into close coordination with the security agencies of many different countries and filled his mind with the fascinating plots and characters found in his books today. His education credits include a Masters in International Relations from Creighton University. A full time author with eight published books, Bob was selected by the Military Writers Society of America as its Author of the Year for 2013. The Eric Hoffer Awards awarded No One Else to Kill its 2013 first runner up to the grand prize for commercial fiction. Two of his other books were finalists for the Eric Hoffer Award in earlier contests. Loose Ends Kill won the 2011 Silver medal for Fiction/mystery by the Military Writers Society of America. Another Colorado Kill received the same Silver medal in 2012 and the silver medal for general fiction at the Branson Stars and Flags national book contest in 2012. Bob wrote two novellas, The Enchanted Coin and The Rescue of Vincent, with his granddaughter for middle grade readers. His most recent work, an international thriller titled The Attack, was released in May 2014. Bob lives in Garden Ridge, Texas, with Leigh, his wife of 41 years, and Cinco, their ornery cat.