TotalRecall Publication announced today the publication of “The Attack” by the multi-award winning Bob Doerr, a former Air Force investigative and security officer who specialized in criminal investigations and counter-terrorism. Doerr uses his military background, including coordinating with the FBI and CIA, plus masters degree in international relations to immerse readers in the gritty realism of a terrorist attack.
The story opens as a terrorist team has just set off four explosive devices in an international airport close to New York City. The leader of the terrorists, Ahmad Khalin, survives the attack and plans to attack a second U.S. airport within the month.
As Khalin makes his escape from the New York area he’s involved in a shooting in Connecticut. Clint Smith, a U.S. government agent assigned to an ultra-secret agency, is at a restaurant across the street when the shooting occurs. He responds to the scene to see if he can help, but Khalin is gone. On a hunch, Teresa Deer, Smith’s boss, sends Smith after Khalin.
Smith’s hot pursuit turns international and takes him to Bar Harbor, Maine; Wiesbaden, Germany; the Costa Brava, Spain; Northern Scotland; Lake of the Woods, Ontario, Canada; and finally into Saskatchewan, Canada, where the final confrontation takes place. Throughout the pursuit, a number of interesting characters add to the subplots and try to survive their involvement in the chase.
‘The Attack’ is available in hardcover, paperback, and Kindle editions from Amazon.com, Barnes & Noble, Books-a-Million, and other booksellers.

International thriller that pits a lone government operative, known as a hunter, against a vicious terrorist intent on attacking two U.S. airports within a month.

Military Writers Society of America Author of the Year for 2013, Bob Doerr, takes you through a fast moving, international thriller that pits a lone government operative, known as a hunter, against a vicious terrorist intent on attacking two U.S. airports within a month. In 'The Attack,' Doerr uses his military background in criminal investigation and counter-intelligence to portray with gritty realism all sides of a terrorist attack.

Author Bio : Bob Doerr grew up in a military family, graduated from the Air Force Academy, and had a 28-year career in the Air Force, where he specialized in criminal investigations and counter-intelligence. His work brought him into close contact and coordination with the investigative and security agencies of many different countries and with the FBI and CIA. This background helped him develop the fictional plots and characters in his series of five Jim West mysteries. He also has a Masters in International Relations from Creighton University, Omaha, Nebraska, and is now a full time author, with five mystery/thrillers and a middle grade fantasy adventure already published. A seventh book was released in late 2013. Four of Doerr’s Jim West novels have been recognized in a variety of book competitions. The Military Writers Society of America selected him as its Author of the Year in 2013. His book Cold Winter's Kill was a finalist for the 2010 Eric Hoffer Award, and in 2011 his book Loose Ends Kill was also selected as an Eric Hoffer finalist! Additionally, Loose Ends Kill was awarded the 2011 Silver medal for Fiction/mystery by the Military Writers Society of America. Another Colorado Kill won the same medal for 2012 and was also awarded the Silver for General Fiction in the 2012 Stars and Flags national book contest. No One Else to Kill was awarded First Runner up for Commercial Fiction in the 2013 Eric Hoffer Awards. 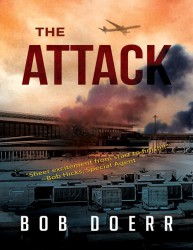