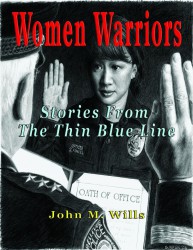 Routine patrol took on a whole new perspective on a June night in 2010.

My rookie and I were driving around checking the businesses along the South Buckner corridor around 2:00 A.M. when we observed a vehicle commit a traffic violation. I instructed the training officer to conduct a traffic stop so we could speak to the driver about the violation he just committed. The squad car’s overhead lights were turned on, and the driver pulled over in a parking lot in the rear of a check cashing business at the next corner. The trainee marked out, and we immediately approached the vehicle to speak with the driver. As we spoke with the driver, I observed a young male walking through the parking lot. He continued to walk so I thought nothing more about him or where he was going.

Once we collected the driver’s information, we returned to the squad car to check the driver and write the necessary citations. After a few minutes a co-worker stopped by our location just to check on us and make sure everything was okay. I walked up to his car and began to chat with him as my trainee continued to write the citations. As I stood on the passenger side talking with him through the window, I noticed that the same young man that walked by our traffic stop was now sitting on the curb as if he was waiting to talk to someone. My co-worker asked “Do you know why he’s here or what he wants?”

“No, I saw him walk by earlier, but didn’t know he had returned.”

We were intrigued about why he was just sitting there, but we also questioned his actions for safety reasons since he was to my back when we were conducting our traffic stop. I stood up, peered over the car at the man, and asked “Hey, guy, what are you doing? Why are you sitting there?”

As he walked toward the squad car, we noticed that he had something black in his hand, something that looked more like a dead bird shriveled up. We weren’t sure what to make of this development so we both stayed at the car with shocked looks on our faces. Then without blinking an eye he told us, “I have a foot too, do you want to see it?” He proceeded back to where his backpack was laying by the curb and pulled out another dried, shriveled up object that neither of us was sure what to make of.

My mouth dropped and I had to ask, “Are you shitting me?”

My co-worker decided to get a closer look, so he exited the car and walked over to where the object was lying on the ground. He turned to me and said, “It looks like it could be a real foot!”

At that point, I was truly creeped out to the extreme. Just as I was trying to get up the nerve to walk over to the object and take a closer look, a sergeant and a female officer pulled up. “Good, you found him,” they said, sounding relieved. “We’ve been looking for him.”

What? I was trying to conduct a traffic stop. It was at that moment I realized this same young man had already spoken to this female officer regarding his strange situation approximately an hour before making contact with me. She had not believed his story. She found the story odd, but just thought the man was a little “off” and offered him some food, but after thinking about it a while later, she decided to discuss the man with her sergeant and see what he thought about the situation.

The sergeant walked over to the object and with a surprised expression stated, “I think this is a human foot because I think I can see toenails.” What the hell! A human foot laying on the ground in front of me . . . OMG! Curiosity finally got the best of me so I had to walk over to see what it was that was lying on the ground. My curiosity should have stayed put because now I was sure that there was indeed a dead human foot on the ground in front of me. Well now we had to figure out where it came from and why this guy had it. So of course I asked, “Why do you have a foot in your bag? And why are you carrying it around in your bag?” The guy admitted that he was a lover of ‘dead’ things and has always wanted to have a human head. Now I had to know, “So where did you get the foot from?” His next statement, “Oh, I got it from the cemetery down the street. I thought I was gonna die because I was digging for six hours straight and I didn’t have any water.” Digging at midnight? “And whose grave were you digging up?” His reply, “Oh, I don’t know, some Jew girl.” Hmmm…..now we all had to know why and from where. He quickly told us that he would show us where he got the foot from because he was so very proud of himself. So since I was the trainer with the trainee, guess who had to take the suspect into custody along with the foot…ME and the rookie of course.

We loaded him up in the squad car after a search and the rookie put on gloves so he could also take the evidence into custody. I was so freaked out that I wouldn’t allow him to put it in the trunk of our car anywhere near my bag, so our co-worker put it in his trunk. The medical examiner was called and down the street we went to check the place from where this human foot was removed. We drove approximately three blocks, turned left, and found an open gate to the rear of a dark cemetery. We parked the squad cars and entered through the gate with nothing more than flashlights to light the way. As the five officers, one sergeant, and one suspect walked down the drive, we all were shocked that at around 1 A.M. on a Friday morning we were walking thru a graveyard. Continuing down the path, we came upon a large three-foot by six-foot hole in the ground with several pieces of wood lying on the ground around the hole. The hole was found in between four headstones so trying to figure out which one it belonged to was a chore. By this time all I could do was beg God for forgiveness for being in a graveyard in the middle of the night and disturbing the sacred resting place of these deceased Jewish people. So now we had to figure out why he dug up this person’s foot. He told us that he was trying to find the head, but got to the feet instead so he took the foot.

After almost nine years on the department, no one could have ever told me that I would be standing in a cemetery in the middle of the night, or better yet that there was actually an offense related to stealing from a dead person/grave. The evidence team was called, a possible name for the victim was found, the foot was on its way to the medical examiner’s office, a homicide detective was contacted, and now it was time to figure out how to write up a report that described this very bizarre arrest. I called the jail in hopes of getting some kind of guidance, but due to the nature of this beast, I was on my own. This eighteen year old kid, who stated he loved dead things, was on his way to the county jail for a felony arrest for stealing from a corpse/grave. Who would have ever thought in a million years something like this could happen, but I made the arrest and the story continues to this day. All of my friends regularly ask me to tell the story again. I oblige simply because to this date no one’s stories can top the man who stole the foot.
(For more stories from John Wills’ “Women Warriors: Stories from the Thin Blue Line” go to www.totalrecallpress.com or amazon.com.)