You are here: Home / Book Advertise / Jonny Plumb and City of Amaranta 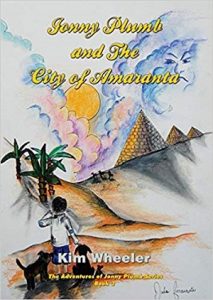 ‘Goodnight Dad,’ Jonny replied. With Legion and Legend by his side, he disappeared up the stairs and stopped off to run a nice hot bath. Within a few seconds he dived in with his customary style and panache and replaced the Golden Globe in its hiding place deep in the underwater world of his bath tub.
As he swam back to the surface of his bath water, he was greeted by his Sea Life friends, ‘Hi Jonny! How were the pyramids?’ Sloppy Botty asked.
‘Busy – but guess what? There’s a lost city under the pyramids.’ Jonny said while grabbing the soap.
‘Who lives there then?’ Wall Eyed Wally asked as he climbed up onto the top of Jonny’s head.
‘Dunno,’ Jonny replied.
‘So, how long have the Dunno been living there then?’ Sloppy Botty
Jonny Plumb and the City of Amaranta 5
asked.
‘No! They’re not called the Dunno, you strange fish,’ Jonny replied laughing.
‘So what are they called then?’ Squelch asked as she also climbed up onto Jonny’s shoulder.
‘Der! He just told you they are called the Dunno,’ Sloppy Botty replied, diving in and out of the bath water.
‘No, you silly sausage. I said I DONT KNOW.’
‘So, did you see the lost city then?’ Wall Eyed Wally asked.
‘Nope. We couldn’t land safely as there were hordes of people around so we’re going back another time. Well, actually next weekend at midnight.’
‘Then will you go to the lost city of the Dunno?’ Sloppy Botty asked.
‘Well, that’s the idea but there’s a curse and, unless we can unlock the code to the curse, we won’t see anything, especially a lost city,’ Jonny replied.
‘Jonny, Jonny come quick! The Golden Globe is flashing,’ Stench shouted. He grabbed Jonny by his feet and unceremoniously dragged him under the beautiful tranquil turquoise waters just in time to hear Cosmos’ explanation.
‘Jonny, to enter the lost city and get past the evil dark forces, you must first repeat the first four lines of the prayer that you recited when you first arrived at Pashoo. When you have recited these words, then – and only then – can you enter the great Sphinx and the lost city.’
‘What’s the name of the lost city?’ Jonny asked while trying to remember the words to the only prayer he knew.
‘The name of the city is Amaranta,’ Cosmos replied.
‘The flower that never fades,’ Jonny said quietly.
‘Yes, Jonny, that is correct. Now do you remember your prayer?’
Jonny thought for a second and then began to recite, ‘Oh thou from whom the breath of life comes.’
‘No Jonny. Not in English. In Aramaic.’
‘Ooooops,’ Jonny replied. He thought for a second and then recited, ‘Abwun, D’bwaschmaja, Nethkadasch, Tete Malkuthach.’
‘Perfect Jonny. Just perfect. Now you are ready.’

The Golden Globe ceased flashing and Jonny swam to the surface just in time to hear his Father say from behind the bathroom door, ‘Jonny I just phoned Isobel’s parents. Sadly, she’s not allowed to come and stay next weekend. Sorry old boy. Bit harsh I know, but perhaps another time.’
‘Oh, ok,’ Jonny replied trying not to feel too disappointed.
‘Who’s Isobel and where were you taking her?’ Sloppy Botty asked as he let rip a real steamer of a parp.
‘Well, Isobel is a friend,’ Jonny replied sheepishly.
‘Girlfriend, Jonny?’ Squelch butted in.
‘Jonny’s got a girlfriend! Jonny’s got a girlfriend!’ Carcuss, Stench and Harpoon all shouted out together.
‘I was going to take her to see the pyramids and the lost city,’ Jonny replied.
‘Lost city? Lost city?’ all the Sea Life enquired.
‘How do you lose a city?’ Sloppy Botty asked.
‘No one’s lost the city, you strange fish. It’s just that no one’s ever seen it.’
‘Then how do you know it’s lost if no one’s ever seen it? Strange human,’ Sloppy Botty said smugly.
‘Because, strange fish with the smelly bottom, I was told by Cosmos.’
‘Ner-ner-ner-ner-na. I was told by Cosmos, Ner-ner-ner-ner-na,’ Sloppy Botty said sarcastically.
‘Well, Isobel can’t come so I’m going to go tonight by myself,’ Jonny replied.
‘Can we come? Can we come? Pleeeeeeeeeeease’ all the Sea Life pleaded.
‘Can you walk on dry land? Can you see in the dark? Can you climb a pyramid?’ Jonny asked.
‘I can!’ Legs shouted.
‘Legs, you can’t even catch up when we swim and you certainly couldn’t climb a pyramid, whatever a pyramid is,’ Stench replied laughing and then asked ‘actually, what is a pyramid?’
‘Well, when I return I’ll tell you,’ Jonny said as he dived down to the Golden Globe.
Jonny Plumb and the City of Amaranta 7
‘Jonny, you must never ever go anywhere alone. Is that understood?’ Cosmos said quite angrily as Jonny reached the Golden Globe.
‘Ok, I hear you Cosmos. I will go this weekend then.’
‘So, what is a pyramid?’ Stench asked again.
‘Well,