You are here: Home / Book Advertise / Jonny Plumb and the Golden Globe 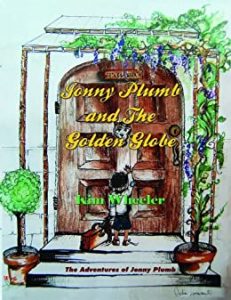 Jonny Plumb and the Golden Globe book start from jonny’s adventures. Jonny went back to staring out of the window at the vast garden, just lazily gazing out with his elbows resting on the window sill, and his head balancing on his hands.
Suddenly, there was the sound of a gong being bashed and making Jonny jump. His head slipped from his hands, banging his chin on the window sill.
‘Ow, that hurts,’ Jonny said to himself.
The gong banged again, angrier than the last time. Jonny soon realised that he hadn’t even washed or changed his clothes.
‘Oh bovver,’ Jonny said and hurriedly took off his shorts. In his haste, he forgot to take off his scruffy old shoes first and somehow got them caught in his shorts. The harder he pulled, the more stuck he became.
‘‘Oh bovver, bovver, bovver,’ Jonny said to himself, trying hard to free himself. He then started to giggle as he jumped one legged around the room. He just couldn’t keep his balance and began to fall head first onto the floor. He put his arms out to try to stop himself from falling and hurting himself, but it was too late. For the second time that day, Jonny fell flat on his face.
Sometime later, Jonny woke on his bed with Nanny Noo wiping his brow.
‘What happened, and why does my head bang so much?’
‘‘Seems you fell over again, Jonny Plumb, and this time you knocked yourself clean out,’ Nanny Noo replied laughing. She gave Jonny a nice hot cup of tea and half a headache pill. Jonny swallowed the pill and began to feel very drowsy. He cuddled up to Pod and soon fell into a deep sleep.
Jonny thought he was dreaming when he woke to hear something strange going on in the garden. In a flash, he jumped up to find out where the sounds were coming from.
‘What was that strange noise?’ Jonny said to himself.
Jonny went over to the window and opened it to see what was happening. Far below was a man digging in the flowerbeds and next to him was a box with odd sounds coming out of it. Jonny could hear singing and managed to hear a couple of words, one being ‘Help.’
‘Scuse me mister, oi mister, scuse me, what’s that noise? ’Jonny shouted.
The man looked up and waved to Jonny. Jonny waved back, but sadly the man ignored Jonny’s question. Perhaps he just couldn’t hear, so Jonny asked again, this time, even louder.
‘‘Mister, mister what’s that noise?’
The man turned a small dial on the box and the noise just disappeared. He looked up and said, ‘Well, master two names, it’s called a radio,’ and immediately turned the small dial on the box again, making the noise came back.
Jonny was gob smacked. He had never heard or seen anything like this before.
Suddenly, the door swung open and there was Nanny Noo with the biggest tray of food he had ever seen, steaming hot and smelling delicious.
‘Here you are master Jonny, some breakfast for you,’ Nanny Noo said, as she placed the tray on the bed. ‘Now eat it all up and then ring the bell next to the bed when you have finished.’
But Jonny was far too excited to eat and began to tell her all about the magic box in the garden.
‘Now, you must eat your breakfast first, and then when you’re feeling better, you can tell me all about the music box,’ Nanny Noo replied as she closed the door.
Jonny tucked into scrambled eggs, bacon, tomatoes, baked beans, toast and a large glass of milk, which he demolished in seconds. He then ran back to the window and peered into the garden. Sadly, he couldn’t see anyone, and even worse, he couldn’t hear all that lovely noise coming from the music box.
Jonny returned to his warm bed and rang the bell. Within a few minutes Nanny Noo returned to remove the tray.
‘Well the bump on your head hasn’t stopped your appetite has it, young man?’ Nanny Noo said smiling. ‘Now, what’s all the excitement about this magic box then?’
Jonny thought for a minute, and then started to sing at the top of his voice.
The Golden Globe 7
Nanny Noo couldn’t believe her ears.
‘You heard the song ‘Help’ by the Beatles on that magic box and you remember all the words?’
‘Yes,’ Jonny replied excitedly, ‘yes, all the words.’
‘Don’t be silly. How could you know all the words to that song? You only heard it just once,’ Nanny Noo replied. ‘Anyway, that’s enough excitement for today. You must get back into bed and rest.’
‘But I don’t want to rest, I want to go into the garden and play,’ Jonny whined.
‘Well, maybe tomorrow you can, but right now its rest, and then tonight, a nice hot bath. If you’re feeling better after that, then yes, perhaps you can go out,’ Nanny Noo said kindly.
‘Can I meet the man with the magic box?’ Jonny asked excitedly.
‘‘Yes, of course you can. By the way, it’s not called a magic box, it’s called a radio,’ Nanny Noo said as she closed the door silently behind her.
Jonny lay staring at the ceiling humming the tune in his head and soon fell fast asleep.
Jonny woke to the noise of Nanny Noo humming and the splish splash of a bath being filled. Nanny Noo came in carrying some nice new clothes.
‘Are they for me?’ Jonny asked while he felt his head.
‘Oh, the bandage has gone, where has it gone?’
‘Well, it probably fell off while you were asleep and is hiding somewhere in your bed,’ Nanny Noo replied. She took a closer lo at the purple bruise on Jonny’s forehead.
‘It’s healing nicely,’ she added caringly as she caressed his head. ‘But now it’s time for a nice hot bath.’

Final word for Jonny Plumb and the Golden Globe book that you will enjoy the book.