The Adventures of Jonny Plumb

"The Adventures of Johnny Plumb will have young audiences in its grip even in the opener as a young and confused orphan boy arrives at a very mysterious new home where magic begins to show its face. You can’t but help but fall in love with this character."

“The Adventures of Jonny Plumb” is the fantastical and funny story of a young orphan boy suddenly endowed with very special powers. Jonny’s life changes dramatically when he’s taken into foster care by the wealthy and extremely beautiful Lady Kathleen Hunter — and comes under the vigilant eye of Nanny Noo.

Jonny’s adventures begin when he finds the mysterious Golden Globe that shifts shapes and holds many secrets. This magical orb takes Jonny on all kinds of amazing and jaw-dropping adventures, high into the furthest regions of space and deep into an underwater world full of rowdy Sea Life — who bubble up from Jonny’s bathtub drain to join in silly songs. These include Wall Eyed Wally and his three baby octopuses Stench, Carcass, and Harpoon; five young dolphins, Oink, Jube, Faraway, Blue Sky One Eye, and Sloppy Botty; Porka the Orca, Legs the Crab, and many more.

Jonny and his friends travel across the universe in the Silver Flying Arrow Space Ship, which can travel at twice the speed of light. Jonny Plumb’s adventures take him around the world to save Lady Hunter’s husband Sir Ranulf Hunter and his best friend Sir Harry Pinner, who have been taken hostage by the Mad Mullah Mud Monkeys of Drak Gob.

TotalRecall Publications Inc. was founded in 1998 by Bruce Moran, a former NASA IT professional who transitioned into computer instruction and educational materials. The company began with the introduction of study guides and Q&A testing software for various computer and financial certification exams and expanded into library and information science textbooks in 2007. Since 2008, the publisher has expanded into general nonfiction and now publishes more than 200 non-fiction and fiction titles, all distributed worldwide through book retailers and wholesalers and via eBook databases such as ebrary, EBSCO, and Books24x7.com. www.totalrecallpress.com

There is a serious message here for children also about being a special child, such as orphaned and ones that have a ‘gift’.

Author Bio : Kim Wheeler is a self-taught photographer, a writer of over one hundred published poems and several books, a dog trainer and dog rescuer. He has also learned to play the guitar, but reports that his strumming sounds sadly like a horse eating shreddies. Kim now enjoys a life of contentment in writing, walking his two rescue dogs, and making beautiful photos of them and the lovely countryside near his home, also displayed on his website. In The Jonny Plumb Series, Kim lets his imagination and “silly side” soar as he takes young readers on grand galactic and underwater adventures with host of memorable characters and canine companions inspired by his own two Rottweilers. Kim’s childhood was scarred by abandonment at birth in a London hospital, the uncertainties of life in an orphanage, and adoption by emotionally abusive parents. He spent thirty years self-medicating with alcohol and drugs as he coped with debilitating physical injuries, emotional pain, and finally a full breakdown. With the help of a caring psychiatrist, Kim embarked on a ten-year journey of self-discovery and recovery, which he describes in his book "Climbing Mountains in the Dark." He offers it for free download from his web page, www.kimwheeler.co.uk, along with another book reflecting his love of animals "Rescue Dogs, Rescue Man." 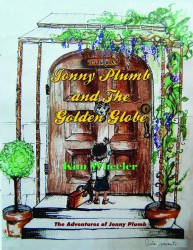