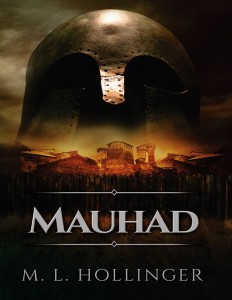 Javik admired the brooding mountains surrounding Berglaundia, his homeland. They stood like ranks of white-haired giants standing shoulder to shoulder to protect the woods and vales below. The green fir trees climbed their slopes in a vain attempt to overwhelm their masters, and the dark
forbidding forests of oak, beech, maple, and elm spread out over the land like a protective blanket. Farmland was scarce and purchased at the price of back-breaking labor to clear the forest away.
He was thankful he was not a farmer. The cool, misty glades of tall trees called to him like a siren. It was fall, and the forest had exploded into an array of color not even rivaled by the wool dyers in his village. The woods teemed with life, and he was a hunter—a hunter learning to be a warrior. He’d lived fifteen winters, and next year he would go on Mauhad, the manhood test of his people, but now he was concentrating on finding game.
He stopped short as he spotted a slight movement in the clearing ahead. He crouched low and approached silently. A quick test showed he was down-wind of whatever made the movement. He found to cover just short of the spot and saw a doe standing in the clearing before him.

2 M. L. Hollinger
It stood deathly still while its long, broad ears scanned the dank brush for some sound of danger. Her wet, black nose twitched to extract any scent of trouble from the crisp fall air. Javik pulled the arrow slowly to full draw and raised the point to the spot where it would find his quarry’s heart. He began to relax his fingers just as the fawn rose behind its mother. A smile spread across his face as he watched the deer’s child search for a teat under the doe’s belly, and that moment of hesitation was just enough to allow the clamber of the village alarm bell to send the pair bounding off into the brush.
“The men are back from the raid,” he almost shouted as he un-noched the arrow and returned it to his quiver. The boy sped off toward his village, anticipating the celebration following a successful raid on the Sentii villages beyond the mountains.
As he entered the stockade gate, his elation quickly turned to foreboding. Everywhere he looked women wept on their mothers’ shoulders, and the wails of mourning told him many houses would be without their men tonight. He made straight for the common house where the raiders would gather, but he was not prepared for the sight greeting him there.
Wounded men lay everywhere. Their women attended to them, unwinding bloody bandages and replacing them with new dressings. In the center near the hearth fire Goldar, the raid leader, sat in a chair with two healers hovering over him.
He was bare from the waist up, and Javik could see the scars of many wounds suffered in previous raids marring his muscular torso. A fresh wound gaped on his left shoulder, and this was the subject of the healers’ attentions.
“Ahhh! Confound it, man! Quit probing and put an iron to it!” the war leader shouted, sending the healers scurrying for the brazier of hot coals holding the cauterizing irons.
Mauhad 3
Javik looked around for his father but didn’t see him. He was about to leave for his own hearth when Goldar called to him. “Javik, come here, lad.”
Javik knelt before the war leader, showing him the respect due from a lad not yet mature. “Yes, sir.”
“I’ve sad news for you.” He paused trying to find some way to deliver his terrible story more gently. In the end, he could find no better words. “Your father’s dead.”
Javik looked up at the sad face of the great man and fought back his tears. A boy who aspires to warrior status must not break down and cry even at such horrible news.
“How did he die, sir?”
At that moment the healer applied the cauterizing iron.
Goldar flinched but did not cry out. The smell of scorched flesh almost made Javik sick, but he fought the urge to vomit with what was left of his resolve. Goldar recovered quickly.
“He was leading the advance guard through the high pass when the Sentii ambushed us. They let his party through before they attacked, and Tolda could have saved himself, but he led his group back and cut an escape route through the Sentii lines for us. His action saved many lives but it cost his own. A Sentii arrow struck him down, and the last thing I saw was their war chief holding his severed head high for all to see. We had no
hope of recovering his body. I’m sorry, Javik, but your father died as he would have wished to die.”
The implications of Goldar’s words began to dawn in Javik’s mind. “What’ll I do now, sir? My mother and I have no other family. We’ll be assigned to some house as wards of the king, and I’ll have no mentor. How will I be able to complete Mauhad?”
Goldar placed one hand on Javik’s shoulder. “I’ll speak to the king. I’m sure he’ll recognize your father’s bravery. I 4 M. L. Hollinger remember something about a blood price in our ancient laws, but it hasn’t been invoked in many years. Don’t worry.
Everything will turn out well. Now, go to Dana. Your mother
needs your strength.”
Javik rose and bowed to the warrior his father respected above all other men and went directly to his mother’s hearth.
He found Dana staring into the embers with her hands folded in her lap. Swollen red eyes and the tracks of many tears clouded her beauty and she looked suddenly old.
(For more by M. L. Hollinger and “Mauhad” go to www.totalecallpress.com or www.amazon.com.)