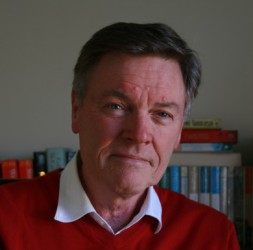 PJ McDermott lived in Scotland until he was twenty-five, working in factories, and on building sites, and earning pocket money as a performer on the Scottish folk club circuit and pub scene. Later, as a mature-age student, he graduated with a Bachelor of Science degree from Glasgow University, met his future wife, and immigrated to Australia. He has two daughters and two seriously cheeky grandchildren.
His debut novel, a coming-of age literary fiction called Small Fish Big Fish, was published under the pseudonym Jacob Carlisle and is available from Amazon, Smashwords, Barnes and Noble and other on-line retailers.
Avanaux: A Hickory Lace Adventure is the first book in The Prosperine Trilogy. The second in the series, Rise of the Erlachi, will be released in November 2015.
The Second Coming: Prelude to Avanaux covers the events leading up to the formation of the Alien Corps and is available as an e-book at no charge from Amazon and Smashwords.
PJ also writes short stories in all genres, with a passion for the weird and wonderful. His short story collection, Dark Fantasy, (by Jacob Carlisle) is available at on-line book stores.