Becoming a cop changes everything you thought you knew about life. Midnight Sin is an inside look at the dark and mysterious world behind the cop’s badge. Rookie cop Gary Hollings quickly learns that wrestling street thugs and arresting drug dealers while trying to track down a serial rapist is nowhere near as tough as watching his back from his fellow cops. He must also fight his inner demons – ones that he never knew he had until he put on that police uniform. The police world is one of long hours and split-second decisions where the choices are not always clear. Midnight Sin is a gritty cop novel that explores the complexities of the cop psyche.

"After reading Tabman's first book, Walking the Corporate Beat: Police School for Business People, I could not wait to read Midnight Sin. Again, I could not put the book down. Midnight Sin is a crime novel that leaves you thinking about your hidden dark side." -- Steve Schussler, Founder of Rainforest Cafe, Yak and Yetti's and T-Rex at Walt Disney World, Orlando, Florida.

When a rookie cop walks on to the midnight shift, the lines between right and wrong become blurred.

Author Bio : Author Michael Tabman was born and raised in New York City. He graduated from John Jay College of Criminal Justice in Manhattan, NY. After serving as a police officer for three years with the Fairfax County VA police department he joined the FBI. Michael is a 24 year FBI veteran investing all types of crimes. 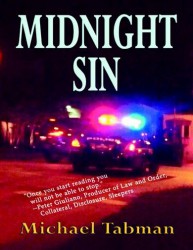