Non-fiction “Living With A Legend” is an homage to Iwao Takamoto by daughter Leslie E. Stern about Disney and Hanna-Barbera animator and creator of Scooby-Doo

Living With A Legend

ATLANTA – Multi-Award-Winning non-fiction book LIVING WITH A LEGEND by Leslie E. Stern offers touching personal stories about her acclaimed stepfather, Iwao Takamoto, who designed such animation masterpieces as Scooby-Doo, Astro, Mutley, and Dino. He directed Charlotte’s Web and had worked on classic films such as Lady and the Tramp and Cinderella.

Leslie’s musings of growing up in a multi-ethnic home amidst cartoon genius tells the story of her stepfather’s influence on her, stories of her youth, and Iwao’s influence on others. This full-color coffee table book includes never-before-seen personal drawings done by Iwao for Leslie and for her mother, drawings done by other famous animators for Iwao, as well as rarely-seen photographs and drawings. These are a delight to behold for anyone who is a fan of Scooby-Doo, The Pink Panther, The Flintstones, and The Jetsons. A must read for any cartoon lover and a pleasure to read for anyone with a heart.
Iwao Takamoto is considered a legend in the animation industry. He would ultimately design cartoon icons like Scooby-Doo, Astro, Mutley, The Great Gazoo, and Penelope Pitstop for Hanna Barbera. He began his career at Disney Studios when he was a young man, fresh out of the Manzanar concentration camp. In fact, he was the first inmate to be released because he had been recruited by Walt Disney. He worked as an animator on classics films such as Lady and the Tramp (he helped design Lady), Cinderella (he designed the loveable mice), Sleeping Beauty, and 101 Dalmatians. When he was asked to join the start-up company Bill Hanna and Joe Barbera were creating, he leapt at the chance.

Founded in 1999, Total Recall Publications, Inc. publishes non-fiction books in a variety of fields, including computer and financial certification exam preparation and library education, with many titles adopted as college texts. These titles are also distributed to libraries, corporations and government agencies via NetLibrary, ebrary, and Books24x7.com. The company is now expanding into fiction—especially mystery/thrillers—self-help, travel, religion, and poetry. The company founder, Bruce Moran, is a former NASA IT professional and school computer instructor who started TotalRecall to produce exam prep guides to accompany his pioneering BeachFront Quizzer computerized practice test engine. The Quizzer CD was licensed for inclusion in the computer certification study guides produced by such publishers as Wiley and McGraw-Hill. TotalRecall is located in Friendswood, Texas near Houston and distributes books through Ingram Book Company, American Wholesale Book Co. Amazon.com, Barnes and Noble, Books-A-Million, Powell’s and other booksellers. For more information, call Bruce Moran 281-992-3131 or visit www.totalrecallpress.com

“Living With A Legend is a loving, personal tribute to one of the top talents in the history of animation." — Leonard Maltin, movie reviewer, movie historian, and author

Multi-Award-Winning non-fiction book LIVING WITH A LEGEND by Leslie E. Stern offers touching personal stories about her acclaimed step-father, Iwao Takamoto, who designed such animation masterpieces as Scooby-Doo, Astro, Mutley, Charlotte’s Web, and worked on classic films such as Lady and the Tramp and Cinderella.

Author Bio : Los Angeles native Leslie E. Stern graduated from the University of Miami in Coral Gables at twenty years old. She pursued her doctoral degree in philosophy and was offered an Assistant Professorship. She attained her Master's Degree in English literature. She went on to an illustrious career in public relations but she never forgot her roots in fiction writing. She wrote her first short story when she was ten years old and has never stopped writing. Her passion comes from her family. Her step-father was world-renowned animation genius Iwao Takamoto, whom her mother married when Leslie was five years old. His passion for his own craft was such that he always boasted that he never worked a day in his life. Leslie feels the same. When she is writing it is pleasure. 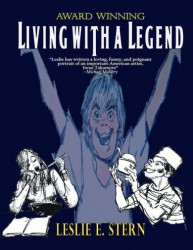