Dreams Fulfilled (Book I of the Dreams Quartet)

“Dreams Fulfilled,” is the first book in the Dreams Quartet, an epic novel of two men who help pioneer the modern sailing industry using philosophies that help them avoid potential actions that could destroy their industry. Leslie E. Stern combines her MA in English Literature, doctoral work in philosophy, and experience as a sailor, racer, and daughter of a legendary luxury sailboat designer to immerse readers in the intriguing world of wind and water and explore the idea that novels don’t need antagonists to enthrall readers.

As world headlines blare war, entrenched partisanship, and negativity in almost every sector, author Leslie E. Stern uses her new novel “Dreams Fulfilled” to shine a bright light on what humanity could be.

The Dreams Quartet is an epic novel that takes place in the 1980’s and portrays two men who help pioneer the modern sailing industry using philosophies that help them avoid potential actions that could destroy their industry – unlike the greed and ruthless corporate behavior cataloged in daily news stories.

Graham Bennington, the patriarch of the American family in this new fiction saga, designs the highest quality sailboats ever seen. In “Dreams Fulfilled” the reader not only becomes entranced with the depth of the characters but learns how to sail and why boats sail, they learn how sailboats are built, and get a the behind-the-scenes look at the sailboat building industry.
Edward Oxford is the patriarch of the English family in the saga. Coming from wealth in the real estate industry, Edward dreams of a marine parts empire and creates the first aluminum masts and booms which make an extreme change in the sailboat industry. He continues to expand, building Oxford Marine, Ltd. as the largest parts conglomerate in the world.

Graham and Edward become friends during their first boat show and that friendship endures throughout their lives. But it is their children who take all their dreams of achievement and transcend them.

Graham has a daughter, Katia, whom he his forced to raise by himself due to the death of his beautiful wife. Katia has the depth of mind, emotional spirit, and forward thinking that makes Bennington Yacht Corporation more successful than even Graham had dreamed. While all the other sailboat manufacturers are closing, Katia’s imagination overcomes all the obstacles that have plagued the industry.

Edward has three sons. His eldest, Thomas, is a professor of English literature and begins the saga as a stodgy Brit with a dull-as-dishwater wife. Kevin, the middle son, becomes an international sailboat racer and is the cheeky adventurer. It is Bryan, Edward’s youngest son, who is his pride and joy from the beginning. It is Bryan who takes Oxford Marine, Ltd. to new levels.
Katia Bennington and Bryan Oxford met when they were in Middle School and they dream of each other throughout their teens, meeting again once but always missing each other as ships passing in the night.

Each book in the Dreams Quartet takes the reader further into the world of Bennington Yacht Corporation and Oxford Marine Limited, as well as the personal lives of the characters. In Dreams Fulfilled the reader is introduced to the world of sailing and the love of nature, family, and business.

Founded in 1999, TotalRecall Publications, Inc. publishes non-fiction books in a variety of fields, including computer and financial certification exam preparation and library education, with many titles adopted as college texts. These titles are also distributed to libraries, corporations and government agencies via ProQuest (ebrary), EBSCO Publishing. The company founder, Bruce Moran, is a former NASA IT professional and school computer instructor who started TotalRecall to produce exam prep guides to accompany his pioneering BeachFront Quizzer computerized practice test engine. The Quizzer CD was licensed for inclusion in the computer certification study guides produced by such publishers as Wiley and McGraw-Hill. TotalRecall is located in Friendswood, Texas, near Houston, and distributes books through Ingram Book Company, American Wholesale Book Co., Amazon.com, Barnes and Noble, Books a Million, Hastings, Powell’s ProQuest, EBSCO Publishing, and other booksellers. For more information, call Bruce Moran at 281- 992-3131 or visit www.TotalRecallPress.com.

“Dreams Fulfilled is the utopia we all strive to achieve in our lives.” --Anna Gill, author and freelance writer

"Dreams Fulfilled" is the story of two men who envision their ideal marine businesses but don’t wholly fulfill those dreams until they see the success of their children. It is the first novel that explores the depths of the sailboat building and marine industry from a viewpoint that captures the heart.

Author Bio : Los Angeles native, Leslie E. Stern, graduated from the University of Miami in Coral Gables at twenty years old. She pursued her doctoral degree in philosophy and was offered an Assistant Professorship. She attained her Master's Degree in English literature. She went on to an illustrious career in public relations, but she never forgot her roots in fiction writing. She wrote her first short story when she was ten years old and has never stopped writing. Her passion comes from her family. Her step-father was world-renowned animation genius Iwao Takamoto, whom her mother married when Leslie was five years old. His passion for his own craft was such that he always boasted that he never worked a day in his life. Leslie feels the same. When she is writing, it is not work. It is sheer pleasure as it has been since her childhood. 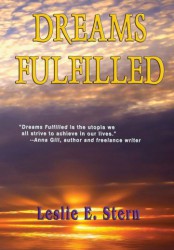