Georgia and Missouri’s recent executions of convicted killers reignited the capital punishment debate across social media and elsewhere. With more than 140 death row prisoners found innocent, there’s good reason the debate rages across all societies and religions. By 2011, even though 140 countries had abolished the death penalty, 20 carried out executions and 60 others imposed death sentences.
Taking a life has more than just legal consequences. To explore the psychological and moral effects of deciding who should die for a crime, a new thriller by Colin Knight provokes readers to consider how they might make the same choices his protagonist confronts. “Some People Deserve to Die” explores the full impact on Alan Davies, the story’s anti-hero, as self-preservation forces him to make life and death decisions in desperate situations.
Newly published by TotalRecall Publictions, the novel begins as Alan, a naive and nerdy high school boy, is plied with alcohol and drugs by four school jocks. He’s then led to an abandoned building where a girl, unconscious and naked, lies helpless in the dirt with a sack tied over her head. Encouraged, berated, and taunted, Alan reluctantly rapes the girl.
Six months after his crime, Alan’s sister, Julie, commits suicide and leaves a note that convinces Alan she had been the unknown girl in the abandoned building. Devastated, Alan runs away from home, succumbs to alcohol and drugs, and enters the underworld of drug smuggling. Soon, he’s drawn into international plots, guerrilla conflict and mercenary activities.
Twenty years later, a chance confrontation brings Alan eye-to-eye with the four jocks who tricked him into raping his sister. When Alan’s cruel and permanent justice has been meted out, he receives a letter explaining the truth about his sister’s rape. He’s forced to recognize the true extent and consequences of his selfish self-pity and to consider that his form of justice was not quite so righteous.
For the astute reader, the gritty story of Alan’s transformation from an innocent, naïve teenager into a vengeful and merciless killer is a backdrop to how some parts of society have become indifferent to and desensitized to taking human life in payment for an offense against society. Alan’s conclusion about who deserves to die doesn’t have a Hollywood ending. No matter which side of the death penalty debate they are on, Alan’s actions will challenge every reader’s opinions.

New thriller/crime novel with exotic locales and has protagonist whose bullied youth drives him to dispense brutal justice to those he holds responsible for his sister's death and destroying his life.

New thriller/crime novel "Some People Deserve To Die," just published by TotalRecall Publications, explores how guilt for a bullied act of rape transforms an innocent teen into a merciless, yet sympat

Author Bio : Colin Knight was born in Manchester, England in 1962 and immigrated to Canada in 1987. He holds a BA Honours in Political Science and an MA in International Relations. He has worked in the public and private sectors for thirty years, most recently as a National Security and Intelligence Analyst within the Security and Intelligence Secretariat of the Privy Council of the Government of Canada, and as a Policy Advisor with Canada’s Royal Canadian Mounted Police. He has traveled extensively, met many people, and enjoys writing. 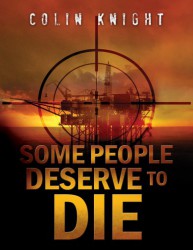