Richard Baran tells a Touching Story of a Dysfunctional, Multi-cultural Family and One Man’s Belief in Santa Clause in his Book, “The Jacket.”

"A Family's secret artifact emerges into a new legacy."

Tidge Mackiewicz, new patriarch of his splintered, multi-cultural family, received a trinity of orders from his dying father, Kid Scream. One order stated for Tidge to quit believing in Santa Claus and stop acting like every day was Christmas. Tidge should also abandon his belief that the Luftwaffe shot down Santa Claus on Christmas Eve in 1944 and Santa survived. Tidge’s father tried to hammer home his belief in family to his son, a last dying breath exhaling his command. “This screwed up family is yours now. Unscrew them.”

Approaching fifty, Tidge still wears a scuffed and stained Army Air Corps flight jacket given to him as a young boy by his late uncle, Brew a Navy aviator and Korean War hero who claimed it belonged to Santa Claus. Uncle Brew also believed that the jacket possessed a special magic. Several years later, his father’s orders remain unfulfilled. Tidge’s multi-cultural family his father dubbed “The Natives” is still screwed up. Everyday is still Christmas for Tidge and his belief in Santa has never wavered.

Tidge and his second wife, Wilhelmina, who he calls, Willy moved from Chicago to an elegant log home on Lake Namakagon in Wisconsin’s Nothwoods. To honor their second Christmas, Tidge suggests inviting their respective families for a holiday weekend in hopes of bringing peace to The Natives. Eighteen adults and children embrace the invitation. Tidge and Willy have planned for every contingency except a record blizzard and a surprise guest.

Tidge plans to play Santa Claus wearing an antique Santa Claus suit given to him by his Uncle Brew. As he removes the costume from a dilapidated box, he discovers four yellow, dog eared letters to Santa Claus, two faded dramatic snap shots from World War II and a poignant quotation from Immanuel Kant. It is the contents of the box along with The Jacket and the spirit of Christmas that has Tidge believing he finally has his special gift to carry out his father’s orders. He discovers he needs more.

TotalRecall Publications Inc. was founded in 1998 by Bruce Moran, a former NASA IT professional who transitioned into computer instruction and educational materials. The company began with the introduction of study guides and Q&A testing software for various computer and financial certification exams and expanded into library and information science textbooks in 2007. Since 2008, the publisher has expanded into general nonfiction and now publishes more than 200 non-fiction and fiction titles, all distributed worldwide through book retailers and wholesalers and via eBook databases such as ebrary, EBSCO, and Books24x7.com. www.totalrecallpress.com

Richard Baran started his writing career when he was eleven with his review of the Namakagon Boy’s Camp Variety Show.

Tidge is the new patriarch of his family and still believes in Santa Clause. Richard Baran's "The Jacket" brings you into the holiday spirit and the magic that is Christmas through this dysfunctional family.

Author Bio : Richard Baran holds a doctorate and two masters’ degrees besides his bachelor’s in business. A Navy veteran, he taught and coached for forty years at the secondary school and collegiate levels. His publishing credits include Where Have All the Go-Go’s Gone?, a novel published by Total Recall Publishers. He has published a coaching text, Coaching Football’s Polypotent Offense, a short story, “That Ain’t No Walleye” and several dozen articles in professional business, education and coaching journals. He and his grammar school sweetheart, Carol Ann, have twenty grandchildren and they divided their year between Franklin Park, Illinois; Phoenix, Arizona and Minocqua, Wisconsin. 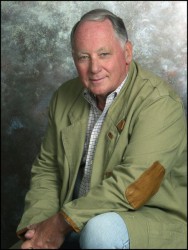