So You Want to Self-Publish 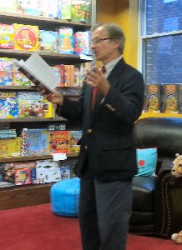 An even bigger problem is getting it published. Today with digital technology and desktop publishing, many are opting to to self-publish. This is a cautionary tale for those choosing that option.

In 1995, I completed my fantasy novel, Hi-doh Hi-dee Ha-Ha. It originated from a short story I had written before I entered graduate school at Iowa State University to study Creative Writing. I had wanted to expand the story into a novel for my Master’s thesis but my advisor, Jane Smiley, overruled it, saying I’d have plenty of time after graduation to write the novel. Nevertheless, I did a semester-long independent study of classic fantasy literature to prepare myself.

The book evolved over a number of years. One section, which I never seemed to get right, I repeatedly revised it. When I finally finished it to my satisfaction, I sent it out to a few, established New York publishers, and one, Putnam (Philomel Books), showed interest but eventually passed on it.

I don’t recall when I first thought of self-publishing, but I decided to have the manuscript bound with a simple black cover, to show around. One of the persons I gave a copy to, was Dudley Moore, when I had the privilege of interviewing him backstage before his concert at the Saratoga Performing Arts Center. At the time I was regularly reviewing concerts for local newspapers, and this so happened to be one of Dudley’s last concerts before he was diagnosed with his terminal illness.

Around this time I also gave a copy to Kayo Wayner, whom I had met at the YMCA and who had been the closest personal friend of my high school basketball coach, Walt Przybylo. It just so happened that Przybylo had been the subject of my first published article, twenty years earlier. It appeared by chance in the sports pages of the local daily. I wrote it as soon as I heard of his sudden death from a heart attack, and sent it to the paper, not expecting that it would become the headline story on the next day’s sports pages. I told how he had affected me, teaching me and everyone he influenced that you should never give up in life, that you should never quit no matter what the odds. Kayo remembered the article and though he never said so, I believe this is why he was interested.

Not only did Kayo like the book, but he encouraged me to self-publish and said that he would help me do this. An accountant, he gave me a plan to raise the funds and I was able to get investors that included my father, one of his business associates, and my godfather. At the same time, Norbert Fleisig, a local publisher, who I was working for as a freelance writer, doing features for his police department annual magazines, offered to publish the book and match the funds that I had raised.

In the meantime, I read a couple books on self-publishing and figured I could do the marketing and get it out to the distributors and bookstores. I had started out with high hopes. With the funding in place, I employed an illustrator, a layout person, and a printing company. My girlfriend at the time, Peggy Steinbach, a self-taught artist, did the cover, and I advertised for an illustrator, who turned out to be Erik McKinney, whom I chose among several who answered my ad. After some trial and error, he hit upon the style I was looking for.

Among the most important steps to follow I learned was to contact book reviewers and try to get reviews. Another was to attend a major book fair. It just so happened that the printing was set to be completed a couple of weeks before the American Booksellers Association Fair, now called BookExpo America, in Chicago. I made arrangements to attend along with my illustrator and have the book exhibited there. On the day before the Fair, we stopped at the printer’s office in Ashland, Ohio – Bookmasters — to pick up the 2000 plus copies of the book.

The Book Fair was a whirlwind affair with celebrities like Dr. Ruth and Kareem Abdul-Jabbar in attendance, both of whom I met and both of whom I had at one time written about in articles for local newspapers. I also made some contacts, enlisting a distributor, New Leaf, out of Lithia, Georgia, who ordered two cases (176 copies) of the book, and leaving the book with a number of book reviewers who were there.

Unfortunately, I never realized how difficult it would be, how people will judge a book not on its merits but on its publisher. Who had ever heard of Nordel Publishing – he published local magazines and promotional tabloids; he had never published a book? So how could my book be worth reviewing, selling, or even reading.

I started by going to my hometown library and was referred to the children’s librarian. She smiled and said she would take a look. When I returned a week later, she wasn’t smiling. No, she pontificated, the library couldn’t accept it. I asked why and she alluded to the first page. It was obvious she hadn’t read very far. Apparently, she was upset because the main character had used the word fart, or at least in part, when he referred angrily to Mozart as Mustfart.

I also had left a copy at the local bookstore, The Open Door, in my hometown. A little lady peered up from her glasses at me. I asked her if she would consider my book. In the intervening weeks, I stopped a couple of times to learn the verdict but she was out. Finally, I caught her. She looked at me gravely. No, they couldn’t take my book. When I asked why, she wouldn’t give a reason. I protested; I wanted a reason. I was a local author and I had written a good book, a book whose setting started out in my very hometown. Why wouldn’t they take it? I went to the front of the store and raised my voice in protest. They won’t take my book, I roared. Of course, they asked me to leave. I couldn’t believe it. I knew it was a good book. I had been writing for 20 years. I had a graduate degree in Creative Writing. I had studied the classics of fantasy literature, and I had put a lot into this book.

In the meantime, I had gone to see the head of the local library. He told me he couldn’t overrule the children’s librarian, but he made a concession and said if I could get some reviews of the book and bring them in, he would reconsider.

Being a local journalist, I was able to get reviewed by local reviewers and all were positive, some even admirable. One actually appeared as the headline review on the Sunday book review page of my local newspaper, and it was compared favorably with a book published by Putnam. Another was a review from a reporter in Vermont, who predicted that the book would “attract a wide spectrum of admirers.” I marched triumphantly into the office of the head librarian for my scheduled appointment with the clips of a half-dozen reviews. Little did I realize that the children’s librarian had spotted me going up the stairs. I sat down confidently and as I was handing over my reviews, she tore in, shouting. She was angry that I had gone “over her head.” I fired back something, and the head librarian who was a very mild-mannered man, calmed down both of us.

She left and he seemed a bit flustered. He was a kind person, and he thanked me for coming in. But then he added, we can put the book in our special collections, but it won’t be circulated. I can’t overrule her decision, he said. It was understandable. Though I had submitted the book to all the major literary review publications as well as many independent literary reviewers, none of them had reviewed the book, and it’s such reviews upon which most libraries base their ordering. And that was that.

What many people don’t realize, including librarians, I have since learned, is that large mainstream publishers actually pay reviewers to write reviews in these literary journals.

I also participated in a reading at Barnes and Noble, and went to a couple schools. The kids at one school in particular loved it. I was invited there twice, once to the class that read it – who puffed me up with personal letters of appreciation and a banner created by the teacher with comments written by the students. The second time I presented to an assembly for the entire school during which I and a colleague from Toastmasters did a performance of a story that I wrote especially for it that used a setting and characters in the book. Afterwards, the principal told me that her office was next door to the class that read it and said she knew when their teacher was reading from it, because they were usually in an uproar.

Yes, they liked Hi-doh Hi-dee Ha-Ha, for the same reason that I think it’s my best book, though I have had seven books published since then. It’s whimsical, poetic, silly, and profound only in a way that the child in all of us can understand, as one of the reviewers described it – “a book for the child in the adult.”

I also had some book signings at various other bookstores and sold a few books here and there, though I probably gave away more than I sold. The distributor sold about a dozen books, but after several months said they seemed to have misplaced the rest. I never did find out what happened to them. Years later, however, I found and still find those books selling on the Internet in places as far away as the UK.

Nearly 20 years later, my hometown library now has several of my books published by established publishers. This summer I was back in New York to do a mini book tour for a book I did with History Press. I went in to see if I could do something about getting Hi-doh Hi-dee Ha-Ha circulated. They had a new children’s librarian there and I left a copy for her review. Her verdict, to my surprise, was the same. It’s too old, she said. We only want new books to be circulated.

Nevertheless, I am still hoping that people will give this book the chance it never had, for as Yolanda, the yoyo bird, says in the book, “in the yanguage of yappiness, there is yoh such yord as yoh, there is only yes.” Like Prz, my high school basketball coach, said, Quitters on the court will be quitters in life, and good kids do not quit. I think I’m a good kid, even at my age, and I’m not going to quit trying to get people to read Hi-doh Hi-dee Ha-Ha.

Tom Calarco is the author of seven other published books in addition to Hi-doh Hi-dee Ha-Ha. His latest is Secret Lives of the Underground Railroad in New York City, published by McFarland and Company.

Information about Secret Lives can be found at http://www.secretlivesoftheundergroundrailroadinnyc.com