"“Wends around the globe with stunning details of locales and characters…skillfully guides through emotional complexities of a wounded man. -- Amazon.com Reviewers"

The story begins as Alan, a naive and nerdy high school boy, is plied with alcohol and drugs by four school jocks. He’s then led to an abandoned building where a girl, unconscious and naked, lies helpless in the dirt with a sack tied over her head. Encouraged, berated, and taunted, Alan reluctantly rapes the girl.
Six months after his crime, Alan’s sister, Julie, commits suicide and leaves a note that convinces Alan she had been the unknown girl in the abandoned building. Devastated and unable to face his mother, Alan runs away from home. In youthful vulnerability, he succumbs to the depravities of alcohol and drugs and enters the underworld of drug smuggling, which in turn draws him into international plots, guerrilla conflict and mercenary activities. First, to the South Pacific island paradise of Vanuatu until betrayal forces him to flee or be killed. Then to Scotland, where bad habits and competition between drug gangs threaten his life and compel him to seek safety and obscurity on a desolate North Sea oil rig. After tragedy destroys his oil rig “family,” Alan then seeks refuge in the hinterlands of Nigeria, hoping wealth, warmth, and anonymity would keep his memories away.
Twenty years later, hollowed out and dysfunctional, a chance confrontation brings Alan eye-to-eye with the four jocks who tricked him into raping his sister. Mentally bludgeoned by the encounter into reliving his crime, Alan explodes in a brief, violent rampage until his arrest places him in the care of his dead mother’s lawyer. Rehabilitated, and the sole beneficiary of his late mother’s estate, Alan finds the clarity of purpose to seek justice for his sister. But when Alan’s cruel and permanent justice has been meted out, Alan received a letter explaining the truth about his sister’s rape; a truth that forces him to recognize the true extent and consequences of his selfish self-pity and possibly accept that his form of justice had not been quite so righteous.
‘Some People Deserve to Die’ is available from Amazon.com, Barnes and Noble, Books-a-Million, and other bookstores.

Colin Knight's MA in International Relations and his work as a National Security and Intelligence Analyst for the Canadian Government provide international locales and intrigue in his new thriller.

TotalRecall Publications announced today the publication of 'Some People Deserve to Die,' a new thriller novel by Colin Knight that depicts the devastating life effects of teen bullying and rape.

Author Bio : Colin Knight was born in Manchester, England in 1962 and immigrated to Canada in 1987. He holds a BA Honours in Political Science and an MA in International Relations. He has worked in the public and private sectors for thirty years, most recently as a National Security and Intelligence Analyst within the Security and Intelligence Secretariat of the Privy Council of the Government of Canada, and a 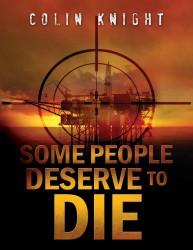