The Adventures of Jonny Plumb begin

The amazing adventures of Jonny Plumb begin with the first in a six book series called Jonny Plumb and the Golden Globe. Jonny is an orphan and this book begins on the day he is fostered and is dropped off at his new home. After overcoming his undone shoelaces a very shiny floor and the embarrassment of falling flat on his face,he meets Nanny Noo and Lady Kathleen Hunter,who hopefully will adopt Jonny and accept him as one of the family. Jonny is then allowed his first ever hot bath and thats where the adventure begins,not only by all the wonderful new sea life friends who befriend him who then show Jonny the Golden Globe,hidden for centuries at the bottom of his bath. The Golden Globe is full of astounding and incredible secrets, but the most amazing one, is that it can shape shift into the Silver Arrow Spaceship, which is capable of flying at twice the speed of light. So join Jonny and some of his new found, quite zany, sealife friends which include three baby octopi called Harpoon, Carcass and Stench,their father Wall Eyed Wally and not forgetting Legend and Legion,the two most formidable of friends Jonny could ever imagine, in a jaw dropping adventure.

"Jonny Plumb Adventures,the most jaw dropping of childrens book and incredible characters all of whom help Jonny adjust to his new life in his new home, new surroundings and most of all, to feel loved" 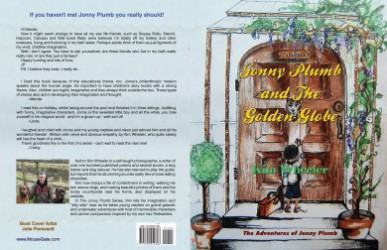