You are here: Home / Book Advertise / The Dutchman’s Gift 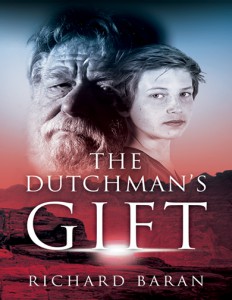 The Dutchman’s Gift book is written by Richard Baran.

Riley “Rocky” Stone, a twelve year old boy on a family vacation, finds what he believes is a magical Apache arrowhead while hiking with his grandfather in Arizona’s Superstition Mountains. His arrowhead is more than magical taking him and his family to Disney World. A rollercoaster ride sends him into the world of the Lost Dutchman Mine where he meets an old miner named Dutch. Riley escapes threats on his life by three AWOL Cavalry soldiers and a band of marauding Apaches. With the help of a Mexican brother and sister his age and “Blind Charlie” an old sightless rancher, Riley escapes back to Disney World with a valuable souvenir gold nugget.