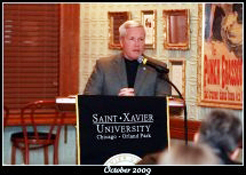 By by Sandy Smetana/ Compiled by John Wills

That said, the gang members usually outgunned us and carried guns in their boots as well as knives. At that point in time, we carried Veratcom radios.

The radio on our belt had to be put into the console in the car to work.
I was the first officer on the scene of a fight and saw 20 to 25 motorcycles parked outside the club. I also saw a familiar three-wheeler that I knew belonged to a member of the gang who was known to always be armed. I got out of my car and pushed the button to release the radio so that I could put it on my belt. As I went to put the radio on my belt, I missed, and watched in horror as it fell to the ground, breaking into about a hundred pieces. I looked over and suddenly realized that about thirty gang members had also watched my radio fall and shatter.
There I stood, outnumbered and outgunned. I looked at them; they looked at me. What to say at a moment like this? The first thing that came to my mind was, “I guess I’m f***ed.”
When the bikers heard that, they broke out laughing, erasing any tension that may have existed between us. We chatted until my backup arrived, lights and sirens screaming, because they couldn’t raise me on the radio and thought the worst. (We had no cell phones in those days.) My accident with the radio not only broke up the fight, but it also broke the ice as well. They could have easily destroyed me and everything else.
I later became a Field Training Officer and used this incident as a training tool for new officers. The lesson was to treat people with respect, and they will treat you the same way. I didn’t get smart with these guys, and I joked about my misfortune. They, luckily, took it in the way it was meant, respectfully, and returned that respect back to me.

For more by John Wills’ “Women Warriors: Stories from the Thin Blue Line” go to www.amazon.com or totalrecallpress.com