The Ollie’s Angels series helps show the conditions starting in 1908 and going through the Great Depression.

"Nancy Powell has received several awards for poems and books she has written over the years."

“Dark Secrets” is the first book in a series based on the life of a farm girl born in 1908. The book begins with Ollie trying to get home after receiving a head injury in an attack by two boys—the same boys that she thinks raped her friend and murdered a girl in a nearby community. She remains in a coma for five days, recalling vivid events of her first fifteen years. The coma ends when an angel tells her to wake up, her brother needs her.

In “Angels for All” Ollie believes in premonitions sent by guardian angels, but has no warning of hardships to come with drought and The Great Depression. Roy and Ollie start married life striving for a better future and a place of their own. Each chapter is an episode that illustrates different difficulties imposed by farm life.

“Listen for the Angels” is the third book in the series describing the struggles of Ollie McNew Glenn. In 1937, Ollie and Roy, after striving to keep their farm during the Great Depression, leave to pursue a better life in California. Finding it is not the Promised Land they anticipated, they return to Arkansas.

On a small Arkansas farm, they labor with mortgage payments, drought, and sickness. Roy goes away almost every year to work and supplement farm income, while Ollie and the children work the land. Roy wants to hire a man to help, but Ollie’s intuition causes her to plead against it. Later, they learn that the man requesting work is a serial killer and has murdered twenty-two people.

They buy the farm of their dreams in 1946. It has a big barn, a house large enough for their six children—and a mortgage. In 1950, Ollie, expecting their seventh child, gets strep throat and loses her hearing. Uterine tumors dictate induced labor in her eighth month. At delivery, Ollie learns she has twins. It is four years before she can afford a hearing aid, allowing her to hear her babies laugh or cry.

The family raises melons and vegetables to peddle in town, and attempt to raise pigs, cotton, and corn—drought and bad luck follow. They try borrowing money to start a dairy, but cannot get a loan; fire destroys the pasture, corn and cotton crops; and a tornado hits the farm. After four children are grown, Roy and Ollie begin operation of a Grade ‘A’ dairy farm.

“Dark Secrets,” “Angels for All,” and “Listen for the Angels” are available at Amazon.com, Barnes and Noble, Books-a-Million, and other booksellers.

"Dark Secrets," a grand prize winner of the 2012 “Books Without Publishers” writing contest.

"Ollie’s Angels," is the story of a gutsy farm girl with a gift for premonitions —each chapter is an episode leading readers through ventures and revealing the history of a family in the early 1900s.

Author Bio : Nancy Powell is married, and the mother of two children, and six grandchildren. She is a member of the Valley View Church of Christ, River Valley Writers of Fort Smith, Oklahoma Writers’ Federation, Inc., and Roundtable Poets. She has an Associates degree from the University of Arkansas, Little Rock. 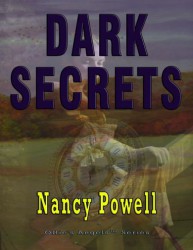