The Ragpickers and the Lady – Part Two 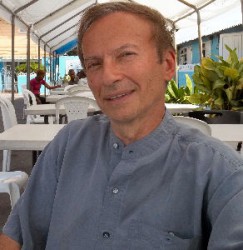 The night comes all too soon, shutting down the light that gives life to all, the lesson we experience throughout our lives, the lesson we sometimes forget because the light is such a wondrous . . .

That evening, as they ate their nightly bowl of rice at the temple, they talked about their day to Krishna. They spoke of finding the broken Buddha and losing it to the gang. They also spoke of the Lady.
“Shiva punished you for planning to sell the Buddha,” Krishna said. “But Brahma consoled your injuries by bringing you the Lady.”
The Lady, that’s all Ram could think about as he lay down to sleep. The brothers decided that instead of going to the dump the next day, they would look for the Lady.

In the morning, they waited outside the hotel. A few tourists dropped coins into their basket, but by noon they still hadn’t seen the Lady. Thinking she may have left before they got there, they went to the tourist district. Through the cobblestone streets of old Kathmandu, they dodged the rickshaws, taxis, and holy cows, passing the shops and food vendors. The streets exuded spices and cooking meat. This mingled with the voices and chirps of the flute sellers, whose instruments clustered in bags slung over their shoulders. Then they heard the bells of the goddess Kumari.
It signaled the daily appearance of the living child goddess from her window at the Kumari Palace. The child, believed to be the reincarnation of the goddess Kumari, is chosen at an early age. She remains a goddess until she sheds the first blood of womanhood, when a new goddess is chosen to replace her.
Normally Ram and Raj would be scavenging at this time, but they enjoyed seeing the young goddess whenever they could. They hurried to get a space inside the large crowd that gathered outside on the cobblestone square facing her window. Finally, the bells stopped and a little head popped out from a window overlooking the crowd. There were gasps and murmurs, and Ram and Raj bowed their heads and kneeled. As the crowd chanted, the boys stole glances at the smiling goddess.
“I think she sees us, Ram,” said Raj.
From the distance, they could not be certain, but it gave them hope to believe so.
“I’m sure we will find the Lady now, Ram,” Raj said. “The Kumari has given us a sign.”
The boys left feeling confident. But it would not be easy. Throughout Durbar Square into the farther reaches of Old Kathmandu, they searched. So many ladies they saw, but none with hair so white yet skin so young. After a couple of hours, they were hungry.
“I don’t think we will ever see her, Ram,” Raj said.
“Don’t say that, Raj. Tonight, we will make an offering to Ganesh. And tomorrow, I know He will bring us the Lady.”
They headed to Bala’s food stand. As they went, they passed an outdoor cafe surrounded by a wrought-iron fence. They looked over the gate and noticed a woman with white hair. It was the Lady. Angela. They ran to the gate and hollered; she saw them and waved. Out came a young man with clenched teeth.
“What do you ragpickers want?” he shouted.
“To see that lady,” they pointed.
“Go away. You cannot come in here.”
“But she is our friend.”
An older man came out. He smiled and spoke softly.
“The lady has asked to see them,” he told the young man.
“Angela!” they shouted as they rushed to her table.
“Raj, Ram,” she said. “Some rice? Coca Cola?”
They nodded happily. Ignoring the stares of others, she bid them sit at her table. The nice man who was the restaurant’s owner and whose name was Mr. Punjab joined them and translated.

In the next days, the brothers met Angela at the restaurant. With the help of Mr. Punjab, they told Angela how they had left home and come to live in Kathmandu. Her eyes seemed to sadden as Mr. Punjab relayed their story.
After several days of nice dinners, she surprised them. She said she would pay to enroll them in a boarding school. The boys were hesitant. It had been a long time since they were in school, and because of their obligations on their father’s farm, they missed many classes. Nevertheless, Angela convinced them to visit a school with her. There they met a nice teacher, whose name was Rupa, who said she would be happy to look after them.
“It is the goodness of Lord Vishnu who has brought you boys,” Rupa said. “Last year, the Lord took my son, but now he has brought me two more.”
The brothers were not about to argue with Vishnu. And with Angela leaving soon, they decided it would be better than staying on the streets, so they agreed to enroll in the school. They went to the airport with her and Rupa. Angela hugged them and tears filled her eyes. She promised to return the following year.

School was not fun. Though they ate well and slept in beds, learning to read and write was worse than begging. Ram was good at Math and a passable reader, but Raj was terrible in everything. He would not follow the school’s rules either. The brothers got into a fight, and Raj ran away.
Before long, Ram learned Raj was working at Mr. Punjab’s restaurant and had moved in with the cook and his family. He grew lonely and began to worry that Angela might not return. One day, during class, Mr. Punjab came to school. After Rupa conferred with him outside the room, she called Ram to come into the hall. Mr. Punjab smiled at Ram.
“Let us take a walk,” he said.
Mr. Punjab looked straight ahead as they walked down the hall.
“Miss Rupa says you are doing very well. That is good to know.”
They walked a little farther and Mr. Punjab gently squeezed Ram’s shoulder.
“I’m sorry to tell you this, Ram,” Mr. Punjab said and his voice trailed off.
Ram’s heart stopped. Could it be that Angela was not coming back?
“Ram, it is about your brother,” Mr. Punjab said. “I am sorry. Raj has passed into the next life.”
Ram’s body stiffened; he could not believe it, though he was not surprised.
“He left the restaurant,” Mr. Punjab said, “and returned to the streets. A farmer brought me his body. Some beggar boys were with Raj. They were walking down an alley when a mad dog jumped out.”
Ram ran outside into the schoolyard. He looked up past the distant icy mounds of the Himalayas that filled the horizon. All he could see was a blank and heavy space. He felt that it had been his fault, that by fighting with Raj, he had caused him to leave the school. Now he would have to conduct Sraddha.

The reddish-gold glow of sunrise colored the sky as Mr. Punjab drove Ram to the holy site along the Bagmati River at Pashupatinath, where the bodies of the dead are returned to God. Here, beneath ornately carved pagodas that point to heaven, pilgrims purify themselves in the river as incense masks the funeral pyres burning human flesh. Dressed in a ritual white gown given to him by Mr. Punjab, Ram saw the cook and the others from the restaurant, including the angry man who had yelled at him and Raj, standing around Raj’s body. It was wrapped in a sheet on a ghat, a small wooden platform that extended out onto the water.
Ram unwrapped the sheet and stared at his brother, who looked more like a picture of himself. He almost expected Raj to open his eyes and start talking. The men helped him pick up the body, holding out the edges of the sheet to lift him. Walking into the shallow water, they let the sheet down, immersing the body. Ram waded in the cool water. He felt as if he had been here before. His mind emptied, and it was as if all the memories he had of his brother flushed from his brain. He watched Raj’s floating body and held back the tears.
Now, it was time, and the men, who had prepared the ghat with logs for the fire, carried Raj’s body out of the water and wrapped it in a yellow sheet. They placed it atop the logs on the ghat. Ram had helped his father perform Sraddha when his mother died, but this time he did not feel as sad. He smeared the sheet covering Raj with a stick of butter-like oil. Then they gave him a bowl of rice with fragrant, white lotus blossoms and evergreen sap. He rubbed the rice and flowers into his brother’s forehead, and chanted the ritual prayer.
“Now, brother Raj, go to God, go and may you never need to return to this life again.”
Ram pushed a piece of dried camphor into his brother’s mouth and lit it. He moved back and the flames erupted.
In the distance an eerie flute slithered. Drums followed, then tolling bells. The flames shot up. The others had stepped away; only Ram stayed close and watched the fire consume the body and listened to the crackle of its fluids giving off the stench of burning flesh.
This is the way of all things. Life is like a mountain river, flowing far and swift, taking everything with it, never stopping, always changing. The self is but a phantom, an illusion. There is no everlasting thing. This was the teaching of the Buddha, the beliefs Ram had been raised with. As Ram watched the plumes of smoke rush into the air, he realized that people were no more than gases and ashes, and gentle eddies of air.