You are here: Home / Book Advertise / War and Destiny 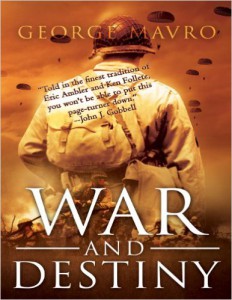 War and Destiny book is written by George Mavro

General Karl Student the commanding general of the XI. Fliegerkorps, looked at the map of Crete hanging on the wall in his room at the Grand Bretagne Hotel, German military headquarter in occupied Athens, Greece. The latest news from Operation Merkur (Mercury) the largest airborne assault in history to capture Crete was not good. Over ten thousand men had dropped on to the island. Losses in men and material were enormous. Contact had been lost with the forces that had dropped to seize Rethminon and Iraklion and were presumed to be dead or captured. The only success had been in at the allied airfield in Maleme. The Fallschirmjager (paratroopers) and Gebirgsjagers (mountain troops) glider troops had managed to gain a toe hold on one end of the air strip. If the allies counter attacked in force before the Luftwaffe managed to bring in reinforcements all would be lost. It would be the greatest military defeat that Germany would suffer and he was in command. He picked up his personal pistol. There was no way he would face Hitler if they suffered defeat His honor would not let him do otherwise. He put the gun down There was still hope, another wave of troops were enroute to Maleme.