Whatever the game of life or sports, Robert competes with all his might and skill

"“What is most compelling is that Robert Marling is a man who identifies future leaders and is committed to growing them. He is insightful, compassionate, and bright..” -- Debbie Sukin"

Born “outside the box,”he does not hestitate to try new and unique approaches in serving banking customers and employees. Marling’story is the inspiring account of a young man who set out to do things in the right way. And it worked; his motto has always been: “Work hard, work smart, and do things right.” Gottlieb makes no effort to hide his admiration for Marling. He sums up Robert’s way with these words: “He has used his gifts admirably, coloring his life and accomplishments with an attractive moral hue. We wish there were more like him, but we are grateful for the example of excellence he has given us.”
When I first approached Robert E. Marling, Jr., with the idea of writing his biography, his initial reaction was a question: “Who would want to read a book about me?” Leaving aside his unpretentious nature for later discussion, his question is valid and deserves to be answered as best we can. So we repeat his question ourselves, why indeed would anyone want to read a book about a man named Robert Marling?
Several responses come to mind. In the first place and on the most basic level, every human life, even the most humdrum, is a story, a novel if you will, with its own quotient of interest, drama, and suspense, regardless of how minimal these elements may appear to be in many cases. The old saying that intelligent persons talk about ideas while the mediocre prefer to gossip about people is misleading. The truth is we have yet to discover anything as fascinating and interesting as people, nor anything so infinitely variable. People are like snowflakes; no two are alike.
Let us say it forthrightly. In the biography of Robert Marling we find an inspiring example of human potential unleashed and elevated to a high plane of achievement. As we shall see, at an early age he abandoned what appeared to be his predictable, preset fate and set out to create a destiny that hardly anyone who knew him could have foreseen. The result is an admirable achievement but defiant of easy explanation. How was it possible for him to do what he did and come as far as he has?
We get mixed messages for an answer. On the one hand, we hear the classic American ideal that people can rise above restrictive or harmful societal and cultural influences and become all they can be. But on the other hand many of our public and governmental institutions, including our schools, are heavily invested in the general theory, remotely European in origin, that people are products, and often the victims, of their environment and will inevitably behave as society has programmed them to behave. Or to put it another way, if they act badly it is because their society is bad. Only by a massive cultural upgrade, therefore, can we hope to upgrade individual lives. It is too much to expect individuals to do so on their own. It must be done for them. Of course the theory has a certain validity, otherwise it would collapse of its own weight. Many people do indeed conform to it, but perhaps only as a path of least or little resistance.
Cases like Marling’s argue the contrary. Theirs is too personal an urge to conform to the abstract laws and principles that govern secondary things and unmotivated people. Some would dismiss the Marlings of the world as exceptions to the prevailing rule, but probably it would be more accurate to describe them as exceptional examples of a better rule.
But there can be a downside to such exceptional individual achievement. The struggle to rise above an adverse environment may leave festering psychic wounds and deeply scarred personalities. Resentments may sublimate into internalized animosities and unhealthful forms of revenge. Those who have managed to overcome hostile surroundings may do all they can to see that no one else does. Like an embittered Scrooge they take a perverse pleasure in spreading the poverty they once suffered themselves. Having once lived as misers out of necessity, they may become misers by choice.
Triumph can also be a trap. Success may morph into arrogance and a haughty indifference for the feelings and opinions of others. Money and position are powerful elixirs, and more than one psychologist has described their aphrodisiac effect, closely akin to an attractive secondary sexual characteristic. Consequently they multiply temptations and test character. And we have only to read headlines and hear news reports to realize that no profession is immune. Both the profane and the pious seem to fail and fall with equal regularity.
Happily, neither of these failings characterizes Robert Marling’s life. It is refreshingly free of such pitfalls, which is another incentive for reading his biography. To summarize his career, he has achieved high standing in his profession, built a business portfolio based on integrity and astute leadership, given employment to thousands of people, accumulated a personal fortune, and established an enviable reputation as a husband, father, friend, and pillar of his community. And he has accomplished all this without falling into the assorted traps mentioned above. Faith in himself has only deepened his faith in a Power greater than himself. A man with a huge capacity for thankfulness and gratitude, he is still who he was, which is a way of saying that he has kept his feet on the ground, remembering where he started and thus at ease with himself wherever he is. As he puts it, he “sleeps well at night,” and with his characteristic generosity of spirit he wishes the same for others.

Founded in 1999, TotalRecall Publications, Inc. publishes non-fiction books in a variety of fields, including computer and financial certification exam preparation and library education, with many titles adopted as college texts. These titles are also distributed to libraries, corporations and government agencies via ProQuest, EBSCO Publishing, Books24x7.com. The company founder, Bruce Moran, is a former NASA IT professional and school computer instructor who started TotalRecall to produce exam prep guides to accompany his pioneering BeachFront Quizzer computerized practice test engine. The Quizzer CD was licensed for inclusion in the computer certification study guides produced by such publishers as Wiley and McGraw-Hill. TotalRecall is located in Friendswood, Texas, near Houston, and distributes books through Ingram Book Company, American Wholesale Book Co., Amazon.com, Barnes and Noble, Books a Million, Hastings, Powell’s ProQuest, EBSCO Publishing, and other booksellers. For more information, call Bruce Moran at (281) 992-3131 or visit www.TotalRecallPress.com.

“Author David Gottlieb has uniquely captured the profile of this banking pioneer and has shown us all the virtues and rewards of dreaming big, working hard, and being persistent.” -- Christopher L. Williston, CAE President and CEO Independent Bankers Association of Texas

In Robert: The Maverick Way biographer Dr. David Gottlieb chronicles the life of Robert L. Marling who rose from anonymity to the pinnacle of personal and banking success.

Author Bio : David Gottlieb is a PhD graduate of the University of Chicago where he majored in both the Sociology of Education and Adolescent Behavior. He has published numerous academic texts and research articles in juried discipline journals, as well as a memoir, Almost a Mensch and the book, In the Game: A Case for Super Adulthood. He served as a member of President Kennedy’s Committee on Science and Technology and as a Deputy Director of The Job Corps in The Office of Economic Opportunity, Director of Research for several White House Conferences on Children and Youth. He was Dean of The College of Social Sciences, University of Houston; Founding Director of The Houston Area Research Center, President and CEO of the Woodlands Center for the Performing Arts (DBA) The Cynthia Woods Mitchell Pavilion, Vice President of the Woodlands Development Company, and is curren-tly serving as VP Strategic Relationships for Board Member of The Woodforest Charitable Foundation. 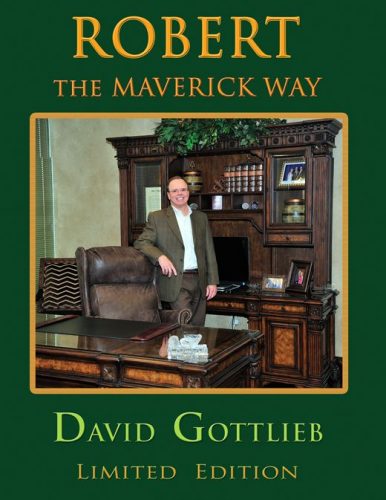